The Primacy of Doubt: From Quantum Physics to Climate Change, How the Science of Uncertainty Can Help Us Understand Our Chaotic World (Hardcover) 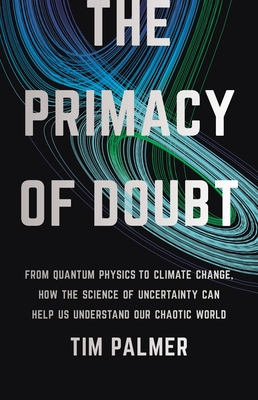 The Primacy of Doubt: From Quantum Physics to Climate Change, How the Science of Uncertainty Can Help Us Understand Our Chaotic World (Hardcover)

Learn how the tools that enabled us to overcome the uncertainty of the weather will enable us to find new answers to modern science's most pressing questions.

Why does your weather app say “There’s a 10% chance of rain” instead of “It will be sunny tomorrow”? In large part this is due to the insight of Tim Palmer, who made uncertainty essential to the study of weather and climate. Now he wants to apply it to how we study everything else.

In The Primacy of Doubt, Palmer argues that embracing the mathematics of uncertainty is vital to understanding ourselves and the universe around us. Whether we want to predict climate change or market crashes, understand how the brain is able to outpace supercomputers, or find a theory that links quantum and cosmological physics, Palmer shows how his vision of mathematical uncertainty provides new insights into some of the deepest problems in science. The result is a revolution—one that shows that power begins by embracing what we don’t know.

Tim Palmer, FRS, CBE is a Royal Society Research Professor in the department of physics at the University of Oxford. He pioneered the development of operational ensemble weather and climate forecasting, and in 2007, he was formally recognized as having contributed to the Intergovernmental Panel on Climate Change's Nobel Peace Prize. Palmer is a Commander of the British Empire, a fellow of the Royal Society and the National Academy of Sciences, and a recipient of the Institute of Physics’ Dirac Gold Medal. He lives near Oxford, UK.

"Tim Palmer's book The Primacy of Doubt provides a remarkably broad-ranging account of uncertainty in physics, in all its various aspects. I strongly recommend this highly thought-provoking book."—Roger Penrose, winner of the 2020 Nobel Prize in Physics

“In a whirlwind of a book that’s partly scientific autobiography and partly the manifesto of a visionary, Tim Palmer masterfully weaves together climate change and quantum mechanics into one coherent whole. Using uncertainty as a unifying principle, Palmer puts forward new perspectives on old problems. A revolutionary thinker way ahead of his time.”
—Sabine Hossenfelder, author of Existential Physics and Lost in Math

“Tim Palmer is a scientific polymath. It’s hard to think of anyone else who could have written so authoritatively— and so accessibly—on themes extending from quantum gravity to climate modelling. This fascinating and important book offers some profoundly original speculations on conceptual linkages across different sciences.”
—Lord Martin Rees, Astronomer Royal of the United Kingdom

"The Primacy of Doubt is an important book by one of the pioneers of dynamical weather prediction, indispensable for daily life, describing how the approach can be used for prediction in other areas, such as climate, health, economy, and conflict.”—Suki Manabe, winner of the 2021 Nobel Prize in Physics