The Next Apocalypse: The Art and Science of Survival (Hardcover) 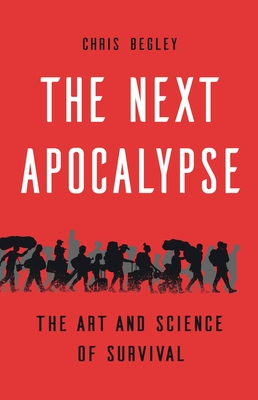 The Next Apocalypse: The Art and Science of Survival (Hardcover)


Not On Our Shelves—Ships in 1-5 Days
In this insightful book, an underwater archaeologist and survival coach shows how understanding the collapse of civilizations can help us prepare for a troubled future.

Pandemic, climate change, or war: our era is ripe with the odor of doomsday. In movies, books, and more, our imaginations run wild with visions of dreadful, abandoned cities and returning to the land in a desperate attempt at survival.

In The Next Apocalypse, archaeologist Chris Begley argues that we completely misunderstand how disaster works. Examining past collapses of civilizations, such as the Maya and Rome, he argues that these breakdowns are actually less about cataclysmic destruction than they are about long processes of change. In short: it’s what happens after the initial uproar that matters. Some people abandon their homes and neighbors; others band together to start anew. As we anticipate our own fate, Begley tells us that it was communities, not lone heroes, who survived past apocalypses—and who will survive the next.

Fusing archaeology, survivalism, and social criticism, The Next Apocalypse is an essential read for anxious times.
Chris Begley is an underwater archaeologist, a wilderness survival instructor, and an anthropology professor. He has a doctorate from the University of Chicago, was a Fulbright scholar to El Salvador, and is a National Geographic Explorer. He has worked in North, Central, and South America and around the Mediterranean. He lives in Lexington, Kentucky.

“[In] Chris Begley’s The Next Apocalypse: The Art & Science of Survival (Basic Books), Begley, a professor of anthropology [and] survival coach, looks at what happened with previous doomed civilisations – including the Maya, the Roman Empire, and Native American societies – to evaluate what can help us in a future collapse.”—The Independent

“Lively and personal—a book for the airport lounge…  The apocalypse is here, it’s just not evenly distributed... Yet Begley has comfort to offer. Past apocalypses have not been a case of everything, everywhere, all at once. … Begley offers tips…, most of them reassuringly simple."—New York Review of Books

“Begley digs into cultural apocalyptic fantasies (as reflected in TV, movies, books, and survivalist subcultures) to see how such concepts compare to actual apocalyptic events. This sociological and scientific exploration is a quiet surprise of a book that will make readers question assumptions about civilizational collapse and apocalypses in general… Full of witty anecdotes about survivalism and prepper culture, Begley’s book is an absolute joy to read and a hidden gem.”
—Library Journal

“An insightful look at the history of natural and man-made disasters and how people have survived them… Extensively researched and evenhanded, this is a valuable resource for preparing for the next crisis.”
—Publishers Weekly

“an insightful overview of the fantasies and realities of catastrophes . . . solid popular science.”—Kirkus

“Begley expertly explains how a doomsday can occur (and includes suggestions on short term survival) but goes easy on the doom, preferring knowledge and preparation over fear and panic.”—Booklist

“A calm, practical and fascinating look at the worst 'what if' scenario.”
—Tristan Gooley