Stop Being Reasonable: How We Really Change Our Minds (Hardcover) 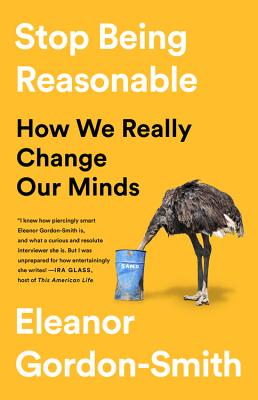 Stop Being Reasonable: How We Really Change Our Minds (Hardcover)


Not On Our Shelves—Ships in 1-5 Days
A thought-provoking exploration of how people really change their minds, and how persuasion is possible.

In Stop Being Reasonable, Eleanor Gordon-Smith weaves a narrative that illustrates the limits of human reason.

Here, she tells the stories of people who have radically altered their beliefs--from the woman who had to reckon with her husband's terrible secret to the man who finally left the cult he had been raised in since birth. Gordon-Smith shows how we can change the course of our own lives, and asks: what made someone change course? How should their reversals affect how we think about our own beliefs? And in an increasingly divided world, what do they teach us about how we might change the minds of others?
Inspiring, perceptive, and moving, Stop Being Reasonable explores why resistance to evidence is often rooted in self-preservation and fear, why we feel shame in admitting we are wrong, and why who we believe is often more important than what we believe. This fascinating book will completely change the way you look at the power of persuasion.
Eleanor Gordon-Smith is a writer and radio broadcaster working at the intersection of academic ethics and the chaos of human life. Currently at Princeton University, she has produced The Philosopher's Zone on Australia's Radio National, appeared as the 'Clinical Ethicist' on 702 Sydney radio, and lectured on ethics, from political contract theory to the philosophy of sex, at the University of Sydney. Her work has appeared on NPR's This American Life, and in the Sydney Morning Herald, The Australian, and Meanjin.
"I knew how piercingly smart Eleanor Gordon-Smith is, and what a curious and resolute interviewer. But I was unprepared for how entertainingly she writes! I read this with pleasure."
—Ira Glass, host of This American Life