The Deficit Myth: Modern Monetary Theory and the Birth of the People's Economy (Paperback) 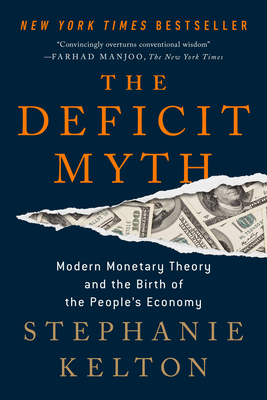 The Deficit Myth: Modern Monetary Theory and the Birth of the People's Economy (Paperback)


On Our Shelves Now at:
A New York Times Bestseller
The leading thinker and most visible public advocate of modern monetary theory -- the freshest and most important idea about economics in decades -- delivers a radically different, bold, new understanding for how to build a just and prosperous society.
Stephanie Kelton's brilliant exploration of modern monetary theory (MMT) dramatically changes our understanding of how we can best deal with crucial issues ranging from poverty and inequality to creating jobs, expanding health care coverage, climate change, and building resilient infrastructure. Any ambitious proposal, however, inevitably runs into the buzz saw of how to find the money to pay for it, rooted in myths about deficits that are hobbling us as a country.
Kelton busts through the myths that prevent us from taking action: that the federal government should budget like a household, that deficits will harm the next generation, crowd out private investment, and undermine long-term growth, and that entitlements are propelling us toward a grave fiscal crisis.
MMT, as Kelton shows, shifts the terrain from narrow budgetary questions to one of broader economic and social benefits. With its important new ways of understanding money, taxes, and the critical role of deficit spending, MMT redefines how to responsibly use our resources so that we can maximize our potential as a society. MMT gives us the power to imagine a new politics and a new economy and move from a narrative of scarcity to one of opportunity.
Stephanie Kelton, professor of economics and public policy at the State University of New York at Stony Brook and Bloomberg contributing columnist, has been called a "prophetic economist" and a "rock star" of progressive economics. She is the founder and of the top-rated economic blog New Economic Perspectives, and a member of the TopWonks network of the nation's best thinkers. In 2016, Politico recognized her as one of the fifty people across the country most influencing the political debate. Kelton was chief economist on the U.S. Senate Budget Committee (minority staff) and an advisor to Bernie Sanders's 2016 and 2020 presidential campaigns. Kelton is a regular commentator on national radio and television and speaks across the world at large gatherings of people interested in global finance, political economy and public policy. She has superb connections in all areas of print and broadcast national media. Her op-eds have appeared in The New York Times, The Washington Post, The Los Angeles Times and Bloomberg.
"Kelton writes clearly and directly, and does well to keep the lay reader in mind throughout. This comprehensive, lucid explanation of a much-buzzed about economic theory will resonate with progressives."—Publishers Weekly

"Stephanie Kelton is among the most prominent of the dozen or so economists associated with MMT. Her new book The Deficit Myth is intended to bring MMT to a broader audience. In addition to an impassioned call for a bigger, more active public sector, The Deficit Myth contains a number of distinct economic arguments."
—The American Prospect

"She has succeeded in instigating a round of heretical questioning, essential for a post-Covid-19 world, where the pantheon of economic gods will have to be reconfigured."—The Guardian

"Kelton and her colleagues have brought a great many non-economists into the economic conversation in a way that no other contemporary branch of heterodox economics has been able to....[Sh]e's dead right about a central political fact of our times: A large, active public sector is more needed today than ever, and unfounded fears of public debt are a big reason we haven't gotten it. Which means her eloquent, accessible book is performing an important public service."—The American Prospect

“This book is a timely and welcome addition to the economics literature.”—Governance

"Kelton certainly offers food for thought at a time when governments are spending eye-watering sums to mitigate damage from the coronavirus pandemic."
—Spear's Magazine

“Kelton’s wonderful tome is digestible for most, even if one needs to comb through it a few times to get to grips with the terminology and utter shock about the state of economic discussion in the media.”—Redaction Politics

"Stephanie Kelton convincingly overturns the conventional wisdom that federal budget deficits are somehow bad for the nation. ...Kelton argues that our government's inability to provide for citizens isn't due to a lack for money; instead, our leaders lack political will."—Farhad Manjoo, The New York Times

"The Deficit Myth is simply the most important book I've ever read. Stephanie Kelton carefully articulates a message that obliterates economic orthodoxy about public finance, which assumes that taxes precede spending and deficits are bad. Kelton's work is on a par with the genius of DaVinci and Copernicus, heretics who proved that Earth revolves around the sun."—David Cay Johnston, recipient of the Pulitzer Prize, an Investigative Reporters and Editors Inc. Medal, and the George Polk Award

"A remarkable book both in content and timing. A 'must-read' that is sure to influence many aspects of policymaking going forward."
—Mohamed El-Erian, chief economic advisor, Allianz

"In a world of epic, overlapping crises, Stephanie Kelton is an indispensable source of moral clarity. Whether you're all in for MMT, or merely MMT-curious, the truths that she teaches about money, debt, and deficits give us the tools we desperately need to build a safe future for all. Read it--then put it to use."—Naomi Klein, author of On Fire: The Burning Case for a Green New Deal

"Kelton's game-changing book on the myths around government deficits is both theoretically rigorous and empirically entertaining. It reminds us that money is not limited, only our imagination of what to do with it. After you read it you will never think of the public purse as a household economy again. Read it!"
—Mariana Mazzucato, author of The Value of Everything: Making and Taking in the Global Economy

"The Deficit Myth is a triumph. It is absorbing, compelling, and--most important of all--empowering. Embracing a well-researched framework that focuses on how real-world economies actually operate, she lays out a realistic path to true economic prosperity. It is an approach that focuses on Main Street and not Wall Street and will permit us to not only revitalize the struggling middle class, but address critical social problems like chronic unemployment, poverty, health care, and climate change. We of course face many binding constraints on our ability to act, but Kelton argues that the intentional underemployment of our own resources that results from the pervasive influence of deficit myths should not be one. We have needed this book for a very long time. Everyone should read it, and then reread it, before it is too late to change course."
—John T. Harvey, professor of economics, Texas Christian University

"Kelton's mission in this powerful book is to free us from defunct orthodox thinking about fiscal deficits rooted in the bygone era of the gold standard. Her theoretical canvas is modern monetary theory. At its core MMT offers a simple proposition: In a fiat currency world, the finances of we the people ain't the same as a summing up of our individual budget constraints, because we the people can't go broke, only deficit-spend our collective self into inflationary excesses. In the prevailing era of too-low inflation, the macro policy implication should be obvious: We the people presently have far more fiscal space than the deficit scold, pay-for crowd preaches. Kelton is a gifted writer and teacher and I confidently predict that The Deficit Myth, brilliantly written and argued, will become the defining book on what MMT is--and what it is not."—Paul Allen McCulley, retired managing director and chief economist, PIMCO, and senior fellow, Cornell University Law School

"Clear! Compelling! Eye-opening and persuasive, The Deficit Myth is an adventure in the world of budgets, jobs, trade, banking and--above all--of money. With the great force of common sense, Stephanie Kelton and the MMT team have broken through the closed circles of so-called sound finance, a stale orthodoxy that has weakened and impoverished us all. This book shows how they did it, and it blazes a path forward, toward a better world built on better ideas."—James K. Galbraith, The University of Texas at Austin

"A robust, well-reasoned, and highly readable walk through many common misunderstandings. A 'must-read' for anyone who wants to understand how government financing really works, and how it interplays with economic policy."
—Frank Newman, former deputy secretary of the Treasury