The Perfect Police State: An Undercover Odyssey into China's Terrifying Surveillance Dystopia of the Future (Hardcover) 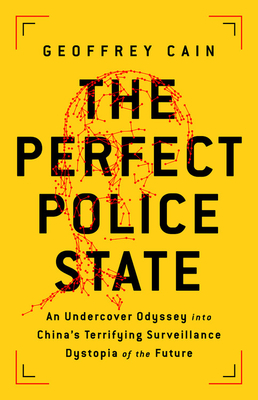 The Perfect Police State: An Undercover Odyssey into China's Terrifying Surveillance Dystopia of the Future (Hardcover)

Blocked from facts and truth, under constant surveillance, surrounded by a hostile alien police force: Xinjiang’s Uyghur population has become cursed, oppressed, outcast. Most citizens cannot discern between enemy and friend. Social trust has been destroyed systematically. Friends betray each other, bosses snitch on employees, teachers expose their students, and children turn on their parents. Everyone is dependent on a government that nonetheless treats them with suspicion and contempt. Welcome to the Perfect Police State.

Using the haunting story of one young woman’s attempt to escape the vicious technological dystopia, his own reporting from Xinjiang, and extensive firsthand testimony from exiles, Geoffrey Cain reveals the extraordinary intrusiveness and power of the tech surveillance giants and the chilling implications for all our futures.
Geoffrey Cain is an investigative journalist and technology writer who reported from Asia and the Middle East for twelve years. He’s contributed to the Economist, Time, the Wall Street Journal, and dozens of other magazines and newspapers. His first book, Samsung Rising: The Inside Story of the South Korean Giant That Set Out to Beat Apple and Conquer Tech, was longlisted for the Financial Times and McKinsey Business Book of the Year award. A Fulbright scholar, he studied at London’s School of Oriental and African Studies and the George Washington University, and is a term member of the Council on Foreign Relations. He lives in Istanbul, Turkey.

“The future has arrived and it is beyond anything George Orwell could have imagined. In this important new book, Cain details exactly how the Chinese Communist Party deployed 21st century technology—facial recognition, DNA tracking, artificial intelligence—to trap millions of its own citizens in a terrifying dystopia.”
—Barbara Demick, author of Nothing to Envy: Ordinary Lives in North Korea

The Perfect Police State should come with a warning:  the scope of the Chinese surveillance state is deeper, broader, more insidious and terrifying than you can imagine. Geoffrey Cain deftly details how China has used global businesses, unabashed censorship at home and alliances with authoritarian regimes to create an ever-expanding police state. Cain doesn’t lose sight of the people entrapped by the system… The Perfect Police State is a tour-de-force.—Elizabeth Becker, author of When the War Was Over

In an expose that is as timely as it is alarming, Geoffrey Cain shows how China is using artificial intelligence and totalitarian repression to turn its westernmost region into a human-rights hellhole. After reading The Perfect Police State, it is impossible to regard the Chinese leadership with anything other than contempt—and fear.
—Blaine Harden, author of Escape from Camp 14

“Packing a wealth of information into a crisp narrative, this is an impassioned and well-informed exposé.”—Publishers Weekly

“A scarifying dive into China’s pernicious spy state…A prescient, alarming work on the overreach of technology and state power.”—Kirkus Reviews

“[T]he real value of Cain’s book is its tying together of the different threads of reportage on ‘the Situation’ in Xinjiang — as it is euphemistically called on the ground. He is especially good at explaining how this vast, sparsely populated desert region became a laboratory for China’s emerging techno-authoritarianism.”—The Spectator

“Geoffrey Cain’s account of the techno-dystopia taking shape in mainland China blends historical background, business reporting, investigative journalism and political commentary… Cain also fits the story into a broader context: the collusion of capitalism and communism….Western executives doing business with China should read this book and look hard in the mirror.”—Times UK

“Cain complements [a personal] account with an efficient analysis of the technological advances requited to create China’s modern panopticon, including major developments in facial and voice recognition and an AI system able to perform ‘predictive policing’… He offers a cogent portrait of the economic imperatives driving the development of these technologies, and of the general corporate reluctance to take much interest in their application.”—Times Literary Supplement