Syria's Secret Library: Reading and Redemption in a Town Under Siege (Hardcover) 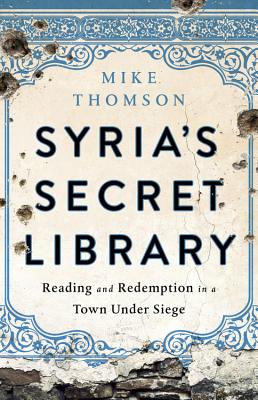 Syria's Secret Library: Reading and Redemption in a Town Under Siege (Hardcover)


Not On Our Shelves—Ships in 1-5 Days
The remarkable story of a small, makeshift library in the town of Daraya, and the people who found hope and humanity in its books during a four-year siege.

Daraya lies on the fringe of Damascus, just southwest of the Syrian capital. Yet for four years it lived in another world. Besieged by government forces early in the Syrian Civil War, its people were deprived of food, bombarded by heavy artillery, and under the constant fire of snipers. But deep beneath this scene of frightening devastation lay a hidden library. While the streets above echoed with shelling and rifle fire, the secret world below was a haven of books.

Long rows of well-thumbed volumes lined almost every wall: bloated editions with grand leather covers, pocket-sized guides to Syrian poetry, and no-nonsense reference books, all arranged in well-ordered lines. But this precious horde was not bought from publishers or loaned by other libraries--they were the books salvaged and scavenged at great personal risk from the doomed city above.

The story of this extraordinary place and the people who found purpose and refuge in it is one of hope, human resilience, and above all, the timeless, universal love of literature and the compassion and wisdom it fosters.
Mike Thomson is a reporter and presenter for radio and television news. He has reported for BBC News from most of the world's most troubled and dangerous places. These have included: Syria, Somalia, Iraq, North Korea, Afghanistan, Darfur, DR Congo, Libya, North Sinai and the Central African Republic. He also writes regularly for several leading British newspapers including The Sunday Times, Sunday Telegraph, Daily Mail and The Independent. He lives in London.
"Mike Thomson's relationship
with the people of Daraya as they were being systematically smashed to pieces
has produced one of the most extraordinary stories to come out of the Syrian
conflict. The assembly of a library under almost daily threat of death and
destruction is appalling and, at the same time, hugely inspiring. A unique
tribute to the power of books and the unquenchable human spirit."—Michael Palin, author and broadcaster

"An inspiring read-humanity
at its best, overcoming adversity at the height of war with the power of love
for their secret library."—David Nott, author of War Doctor

"Writing in a clear and thoughtful style, Thomson obviously cares for the people he is reporting about. This book marries geopolitical understanding of Syria's war with deeply emotional stories of humans dealing with a horrifying reality in extraordinary ways."—Booklist, starred