Russia Upside Down: An Exit Strategy for the Second Cold War (Hardcover) 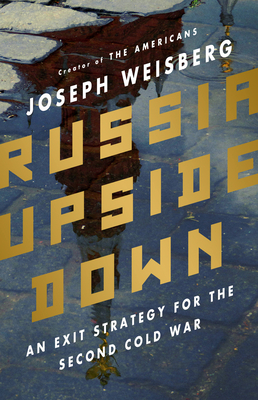 Russia Upside Down: An Exit Strategy for the Second Cold War (Hardcover)


In Stock—Click for Locations
A former CIA officer and the creator of the hit TV series The Americans makes the case that America's policy towards Russia is failing--and we'll never fix it until we rethink our relationship.  Coming of age in America in the 1970s and 80s, Joe Weisberg was a Cold Warrior. After briefly studying Russian in Leningrad, he joined the CIA in 1990--just in time to watch the Soviet Union collapse.  But less than a decade after the first Cold War ended, a new one broke out. Russia changed in many of the ways that America hoped it might--more capitalist, more religious, more open to Western ideas. But US sanctions have crippled Russia's economy; and Russia's interventions have exacerbated political problems in America. The old paradigm--America, the free capitalist good guys, fighting Russia, the repressive communist bad guys--simply doesn't apply anymore. But we've continued to act as if it does. In this bold and controversial book, Joe Weisberg interrogates these assumptions, asking hard questions about American policy and attempting to understand what Russia truly wants. Russia Upside Down makes the case against the new Cold War. It suggests that we are fighting an enemy with whom we have few if any serious conflicts of interest. It argues that we are fighting with ineffective and dangerous tools. And most of all, it aims to demonstrate that our approach is not working. With our own political system in peril and continually buffeted by Russian attacks, we need a new framework, urgently. Russia Upside Down shows the stakes and begins to lay out that new plan, at a time when it is badly needed.
Joseph Weisberg is an Emmy award-winning television writer and producer, best known for creating The Americans. He is the author of two previous books: the novels An Ordinary Spy and 10th Grade. He lives in New York.
“Weisberg clearly knows his stuff…Perceptive insights into a consistently dysfunctional international relationship.”
—Kirkus Reviews, starred

“Joe Weisberg uses his own story, and his deep knowledge of all things Russian, to argue that we need a new understanding of our oldest adversary. What a brilliant book!”
—Malcolm Gladwell

“How dare you, Joe Weisberg, make me rethink my comfortable loathing of the Russians? I spent my entire career fighting these guys and saw close up how dirty they fight. But do we fight any cleaner? Your book convinces me that both sides are rational actors pursuing defensible goals. Putin and Biden can find common ground if they don’t let outdated biases and antagonisms get in their way. Sign me up, Joe, for not wanting a Second Cold War. The first one was bad enough.”—James M. Olson, former chief of CIA Counterintelligence and author of To Catch a Spy: The Art of Counterintelligence

“Joseph Weisberg’s crusade against groupthink, which drives the United States and Russia into another Cold War, is truly an act of bravery.”—Andrey Bezrukov (AKA Donald Heathfield), former Russian intelligence officer serving as an “illegal” in the United States, 1999–2010, and current professor, Moscow State University of International Relations

“I spent twenty-eight years as a CIA officer, working to understand and operate effectively in the world. Russia Upside Down hit and intrigued me intellectually and made me look at foreign affairs through a different lens.”—Darrell M. Blocker, former chief of the CIA’s Africa Division and Deputy Director of the Counterterrorism Center, and current COO, Mosaic Security

“Fans of The Americans, readers interested in U.S.-Russia policy, and anyone wishing to learn more about the topic will enjoy this insightful, thought-provoking book.”—Library Journal

“Weisberg offers a refreshing perspective on the tense relationship between the two countries throughout his work.”—KCRW’s Scheer Intelligence