Superpower Interrupted: The Chinese History of the World (Paperback) 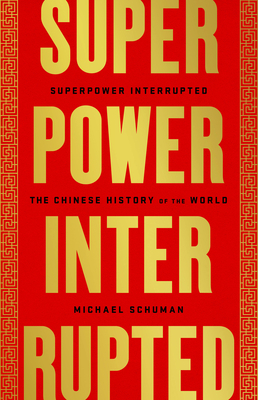 Superpower Interrupted: The Chinese History of the World (Paperback)


Not On Our Shelves—Ships in 1-5 Days
This global history as the Chinese would write it gives brilliant and unconventional insights for understanding China's role in the world, especially the drive to "Make China Great Again."

We in the West routinely ask: "What does China want?" The answer is quite simple: the superpower status it always had, but briefly lost.
In this colorful, informative story filled with fascinating characters, epic battles, influential thinkers, and decisive moments, we come to understand how the Chinese view their own history and how its narrative is distinctly different from that of Western civilization. More important, we come to see how this unique Chinese history of the world shapes China's economic policy, attitude toward the United States and the rest of the world, relations with its neighbors, positions on democracy and human rights, and notions of good government.
As the Chinese see it, for as far back as anyone can remember, China had the richest economy, the strongest military, and the most advanced philosophy, culture, and technology. The collision with the West knocked China's historical narrative off course for the first time, as its 5,000-year reign as an unrivaled superpower came to an ignominious end.
Ever since, the Chinese have licked their wounds and fixated on returning their country to its former greatness, restoring the Chinese version of its place in the world as they had always known it. For the Chinese, the question was never if they could reclaim their former dominant position in the world, but when.
Michael Schuman has been a foreign correspondent in Asia for 23 years, first with The Wall Street Journal and then as Time magazine's international business correspondent based in Hong Kong and Beijing. He currently writes on a freelance basis for several publications: as a columnist for Bloomberg View and BusinessWeek and features for the New York Times and Forbes.
"This brisk chronicle delivers meaningful context for readers looking to go beyond the daily headlines about China."—Publishers Weekly

"For those new to the subject, or those who want a brush-up (which was the Yongle Emperor?), Schuman's is in the running for an "if you only read one book on Chinese history..." accolade."—Asian Review of Books

"Of considerable interest to students of world trade, geopolitics, and history."
—Kirkus Reviews

"Schuman takes the reader on an illuminating, 3,000-year journey deep into the country's history, as the Chinese see it, and offers a thoughtful understanding of the historical roots of its national objectives."—Irish Times

"Michael Schuman takes the reader on an invaluable journey deep into the hinterland of the Chinese psyche, tying Xi Jinping's modern ambitions to the country's centuries-old narratives. From the rise and fall of dynasties to painful interactions with neighboring barbarians and unsavory westerners, Schuman's scholarship vividly describes China's exceptionalism and how it underlines the ruling communist party's objectives to this day."—Richard McGregor, author of The Party: The Secret World of China's Communist Rulers and Xi Jinping: The Backlash

"Schuman skillfully narrates more than three thousand years of history through a Chinese lens that places China at the center of the world and Chinese civilization above all others. Superpower Interrupted provides crucial insights into Xi Jinping's Chinese Dream of national rejuvenation that seeks to restore China to its rightful place as world leader. Superpower Interrupted is essential reading for all those who want a deeper understanding of the historical roots of China's national objectives."—Bonnie Glaser, Center for Strategic and International Studies

"Superpower Interrupted is a concise and elegant survey of China as a dominant power in Eurasia. Michael Schuman provides an illuminating perspective on the Middle Kingdom's rise, fall, and reemergence as a geopolitical superpower and the evolution of its ties with the rest of the world. Those wondering how a rejuvenated China will conduct itself in world affairs will do well to read Superpower Interrupted for its deep insights and rich historical knowledge."—Minxin Pei, Claremont McKenna College, author of China's Crony Capitalism

"Timely, eloquent and lively throughout, Michael Schuman has written a book that covers China's long past--and hints at its future."—Peter Frankopan, Oxford University, author of The Silk Roads

"This is the best book about China I have read in a long, long time. Michael Schuman elegantly walks us through Chinese views of the outside world and reveals why China even today has an antagonistic relationship with the West."
—James McGregor, author of One Billion Customers: Lessons from the Front Lines of Doing Business in China

"All too often, foreign commentators talk about China mainly as a foil for their own concerns. Michael Schuman looks at China on its own terms, revealing how their own history has shaped how the Chinese see their place in the world and their future. If you want to understand the 'Chinese Dream,' Superpower Interrupted is a great place to begin."—Patrick Chovanec, School of International and Public Affairs, Columbia University

"As noted historian Jonathan Spence argued some twenty-two years ago, the West has long been guilty of seeing China through the same lens that it sees itself. Michael Schuman provides a fascinating antidote to this bias, examining China's worldview through its own lens. Is history on China's side? Schuman offers some tantalizing hints to the answer of that critical question."—Stephen Roach, senior fellow Yale University, former chairman Morgan Stanley Asia

"In his extraordinary book, Michael Schuman has provided the West with a much needed gift--a look at how the long history of China has shaped the China of today. Anyone who wants to really understand China needs to read Superpower Interrupted."—David Rubenstein, co-executive chairman, The Carlyle Group