Eridu: The History and Legacy of the Oldest City in Ancient Mesopotamia (Paperback) 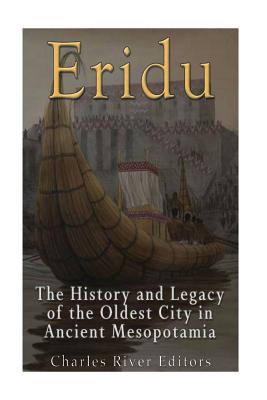 Eridu: The History and Legacy of the Oldest City in Ancient Mesopotamia (Paperback)


Not On Our Shelves—Ships in 1-5 Days
(This book cannot be returned.)
*Includes pictures
*Includes ancient accounts and legends about Eridu
*Includes online resources and a bibliography for further reading
*Includes a table of contents
"After the kingship descended from heaven, the kingship was in Eridu." - Excerpt from the opening paragraph of the Sumerian King List
Emerging from the desert flats of southern Iraq can be seen the remains of a large mound, approximately 1750 feet x 1750 feet in size, surrounded by several smaller mounds. Known today as Tell Abu Shahrain or in the ancient world as Eridu, this site contains some of best examples of the Ubaid culture, and it was one of the first urban centers of civilization in southern Mesopotamia, if not the first itself. Many famous stories came from the mythical landscapes of Iraq's deep south. In the literature of ancient Sumer, Eridu was regarded as the primordial city, the first urban center, believed to have existed long before the great mythical Flood that wiped out human culture in the Book of Genesis and other earlier traditions. It was to places like this that Western explorers first came in the 19th century, searching for the origins of the lands which the Bible described as the cradle of the human race. In doing so, they discovered that Eridu was also a real place. The astonishing site is located about 8 miles southwest of the Sumerian city of Ur, and when it was first excavated in the mid-19th century, Western archaeologists were confused as to how a city as large as this could have existed in such a vast and waterless desert. But Eridu is positioned on the edge of the great alluvial plain of Sumer, a wild and beautiful marshland where the Tigris and the Euphrates meet. This was the Biblical "Garden of Eden", an ancient landscape that was renowned for its fertility in the past. To many Westerners, Iraq's history and culture were a blank before 1991, but ironically, as war engulfed the region, it helped underscore the importance and influence of the area on Western civilization. It was here, in the ferocious landscape of south Iraq, old Sumer, that the first laws, science, and cities came into being. Eridu is a place of extraordinary significance for the study of the earliest stages of civilization in history, and it is one of the best examples of cultural continuity in Mesopotamia, from the earliest prehistoric stages in which settlements emerged to the later historic periods. Eridu had a special status, not as the residence of a ruling dynasty of kings but for its religious significance; a series of temples were built there, devoted to the patron god of the city, Enki. Each one was built upon the ruins of its predecessor, and each one represents the architectural, religious, and social changes that occurred at the site throughout its history. Eridu: The History and Legacy of the Oldest City in Ancient Mesopotamia examines the tumultuous history of one of the most important cities of antiquity. Along with pictures depicting important people, places, and events, you will learn about Eridu like never before.