Gulf of Mexico- Energy Infrastructure Analysis in Real-Time: Six Mega-Trends That Could Shape the Future of Energy (Paperback) 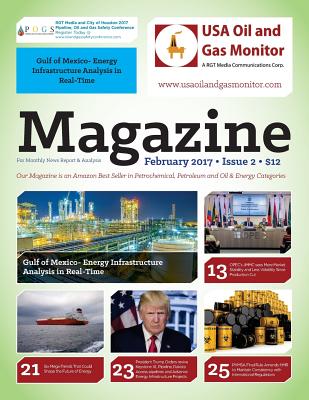 Gulf of Mexico- Energy Infrastructure Analysis in Real-Time: Six Mega-Trends That Could Shape the Future of Energy (Paperback)


Not On Our Shelves—Ships in 1-5 Days
(This book cannot be returned.)
Energy Infrastructure and Energy independence- key factors to Economic Growth The Gulf of Mexico area, both onshore and offshore, is one of the most important regions for energy resources and infrastructure. Gulf of Mexico federal offshore oil production accounts for 17 per cent of total U.S. crude oil production and federal offshore natural gas production in the Gulf accounts for 5 per cent of total U.S. dry production. Find our more analysis and the natural resources of states situated along the GOM, in addition, you will find out real time analysis of U.S. Gulf Coast Operable Refinery Capacity. To bolster the USA energy infrastructure- that would lead to the nation's energy independence, President Trump revived the Keystone XL Pipeline, Dakota Access pipelines and advance energy Infrastructure Projects In this edition- you will read the six mega-trends that could shape the future of energy. OPEC's JMMC erases every doubt of non-cooperation by member countries at first meeting- sees more market stability and less volatility since production cut is in effect. PHMSA has placed on public inspection a final rule that amends the U.S. Hazardous Material Regulations HMR to maintain consistency with international regulations and standards. And lots more to read in this edition. Get Your Copy POGS Week '17 in partnership with City of Houston- Showcases "Must Have Technologies" for Oil and Gas companies, Midstream and Pipeline subsector and Downstream. The city of Houston mayor issued a proclamation affirming the conference and encouraging stake holders to attend the conference- The International Pipeline, Oil and Gas Safety Conference will take place in Houston Texas -March 14-16, 2017. Visit the event site for more details- www. oilandgassafetyconference.com - Gloria Towolawi.
Gloria Towolawi is the Publisher/Editor-in-chief, USA Oil and Gas Monitor. A monthly Magazine for the energy, oil and gas industries.