Demystifying the French: How to Love Them, And Make Them Love You (Paperback) 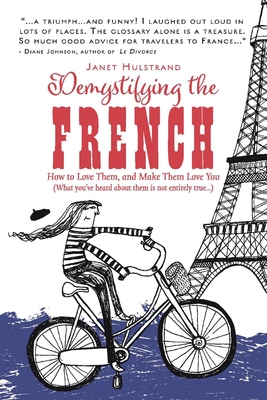 Demystifying the French: How to Love Them, And Make Them Love You (Paperback)


In Stock—Click for Locations
Demystifying the French: How to Love Them, and Make Them Love You is aimed at first-time visitors to France as well as long-term expatriates. Designed to help readers "crack the code," avoid common mistakes, and get off on the right foot with the French, the book begins with five easy-to-follow essential tips "for even brief encounters" by introducing a few French phrases—and how to say them—that will pave the way for a positive experience in France. The tips are followed by 10 chapters that go into a deeper explanation of French habits, manners, and ways of viewing the world. Hulstrand shares the perspective she has gained in nearly 40 years of time spent living, working, teaching, and traveling in France, and illustrates the principles she is discussing with sometimes touching, and often amusing, personal anecdotes. Her deep admiration and affection for the French people is clear, but she also knows that they can "require special handling" and provides helpful, practical tips on how to do so, inviting readers to learn from her mistakes. Reflections contributed by David Downie, Adrian Leeds, Harriet Welty Rochefort, and other well-known commentators on Franco-American cultural differences provide additional perspective and depth. A glossary of French terms that is both substantive and whimsical provides surprising insights into historical as well as cultural reasons for the French being "the way they are." Aimed mainly at an American audience, this book will be helpful for anyone who wants to better understand the French, and have fun while doing so.
Janet Hulstrand is a writer, editor, writing coach, and teacher who divides her time between France and the United States. Her essays and articles have appeared in the Christian Science Monitor and Smithsonian, and she writes regularly for Bonjour Paris, France Today, France Revisited, and for her blog, Writing from the Heart, Reading for the Road. In 1997 she created "Paris: A Literary Adventure" for the City University of New York, and she has taught this class in Paris nearly every summer since then, as well as literary travel programs in Cuba, Italy, and Hawaii. In 2008 she created "Writing from the Heart," a workshop/retreat offered in Essoyes, a beautiful little village in the Champagne region of France. She is an adjunct lecturer in the Department of English at Queens College, CUNY; a popular instructor of classes at Politics and Prose Bookstore in Washington, D.C.; and she has led book groups at the American Library in Paris. Hulstrand is sole proprietor of Winged Words Editorial Services, and founder and co-director of the Essoyes School, which offers writing and art workshops. Her first book, Moving On: A Practical Guide to Downsizing the Family Home, received widespread praise, and she and her coauthor publish a blog, Downsizing the Home: Lessons Learned. She is currently working on a literary memoir, A Long Way from Iowa.
"Janet Hulstrand's Demystifying the French is a witty, wise, and keenly observed cultural guidebook. As an American who has lived in Paris for 25 years, I found myself nodding vigorously throughout the book, thinking, 'Yes, yes, that's exactly right!' For those of us who have learned French cultural codes through painful trial and error, this book feels rewarding. For Americans just arriving in France, it will be absolutely indispensable." Jake Lamar, author of Rendezvous in the Eighteenth


"One of the greatest privileges is to feel welcomed and at home as a foreigner, especially in France, a country that shares vast cultural, artistic, and culinary riches with her visitors. But you are cheating yourself if you do not get under the surface of this country, and the only way to do this is to learn to understand and love the French themselves. Janet Hulstrand, after decades of spending time in France and conducting tours and workshops with Americans, serves as your very wise, practical, and entertaining tutelary spirit. She invokes her own experiences as well as the insights of other wonderful writers on France to guide you to behavior and habits that ultimately show respect for French values and pave the way to some of life's most enriching friendships. Hulstrand, as intermediary, could not offer a more lovely gift." —Jeffrey Greene, author of French Spirits


"...a triumph...and funny! I laughed out loud in lots of places. The glossary alone is a treasure. So much good advice for travelers to France..." Diane Johnson, author of Le Divorce