Peo & Trinket: A Story to Wake Up Your Child's Heart (Hardcover) 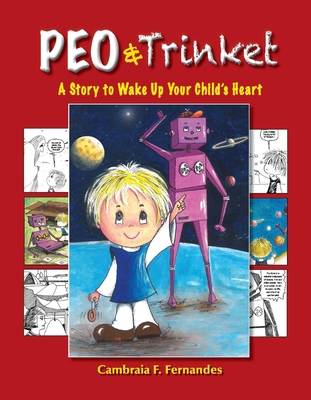 Peo & Trinket: A Story to Wake Up Your Child's Heart (Hardcover)


Special Order—Subject to Availability
This is the story of a boy who had a rusty washer he called the "red button," his old Trinket robot, and his very poor, busy parents. He and his parents live in an underground city where at this time the poor people lived.The old robot was managed by Peo's parents to be the teacher, to teach him the school subjects, as well as to take care and to be a friend to Peo.Peo and his Trinket robot have developed a great friendship.Peo heard from his mother many stories about the surface of the earth, which at this future time was overcrowded.He heard about the blue sky, about the flowers, birds, big trees and the ocean. He heard about the "precious things" lying on the surface.He decided to get to know the surface and so he and his robot started a great adventure!Peo made a special data program on his Trinket robot to help him search and find his things.Peo and Trinket climbed the large public elevator to the surface.Peo was static and happy looking at the big city on the earth's surface. The very green field and the big yellow road!The sun was red from the smoke from many chimneys. The sky was dark and sad, but Peo didn't see the sky like that. He had in his eyes and in his heart the images he had always dreamed of finding when he reached the surface. A blue sky, a green field, and flowers. many colorful flowers like those drawn by your mother !.But Peo and Trinket didn't find the precious things they were looking for. Seeing the men of the space city destroy the great shining star across the sky, leaving a trail of golden light, they felt sad ... but then they saw! A beautiful white spaceship pointing to the infinite universe. So they embarked on a great voyage through space, full of adventures and discoveries!Embark you on this trip too. You will love discovering the good and amazing things they have discovered. Good trip!
Cambraia Fonseca Fernandes is a Journalist, Illustrator and Graphic Designer. Estácio de Sá University-Rio (Journalism), New York University-NYC (Book Publishing) and School of Visual Arts-NYC (Graphic Design). She worked for several publishers in New York: Modern Publishing, as an illustrator. Chelsea House Publishers, as a Senior Graphic Designer. Scholastic for two years as a Graphic Designer in house, and finally W. H. Freeman where she worked for 17 years, and a few years more for W. H.Freeman/Macmillan. She is a New York Book show prize-winner. From this book, she intends to enter the magical world of children. This was the place where she always took refuge when she had a break from work commitments, and as a widowed mother of three children. At age 12 she read the first book of science fiction and there, she discovered the magical world of adults, where dreams, creativity and the possibilities of the impossible can happen on this wonderful planet, where good and evil mix. Everything is possible for the human being and there are only two things he can't master: the creation of life and his ransom for death. We are the masterpiece of the Creation. We can dream about all our possibilities to live, discover, build, evolve, on this planet, in this wonderful, incredible, fantastic and infinite Universe! To live in the Magical World of the adult one of the children that we all have inside our heart.