The Lactate Revolution: The Science Of Quantifying, Predicting, And Improving Human Performance (Paperback) 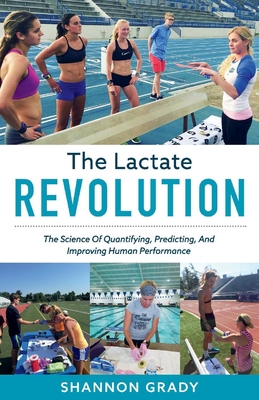 The Lactate Revolution: The Science Of Quantifying, Predicting, And Improving Human Performance (Paperback)


Not On Our Shelves—Ships in 1-5 Days
This book provides an overview of the science of lactate in human performance and an innovative, yet simple to use, approach to the application of lactate in improving human performance. This book goes into great detail on the theories as well as numerous athlete case studies in several sports and their quest for peak performance using a physiology first methodology.
Shannon Grady, Exercise Physiologist, is a training advisor to numerous World class coaches and athletes in a myriad of sports. Shannon believes in the use of physiological data to plan all aspects in training and uses a unique method of lactate testing and application that has led to the success of countless athletes around the world. She is a global leader in the application of lactate testing for improving human performance. She is a nationally recognized expert in the field of applied Physiology and Exercise Science. In over fifteen years as an industry leader in sports performance management, Shannon has worked with over 9,000 athletes, including Olympic, professional, collegiate, and high school athletes in over 25 sports; including Olympic, World Champions/Medalists and NCAA Champions.Shannon's career began in 1999, where she provided physiological testing and feedback to athletes and coaches representing nearly all U.S Olympic and National Teams. It quickly became evident to Shannon that there was a significant gap between the testing results and the application of that data. Shannon isolated the need to create an innovative approach to designing and implementing a comprehensive training model based on the dynamic nature of physiology; thus the evolution of System Based Training™.Shannon's expertise in the field of physiology both as a practitioner and as an academic, has resulted in her becoming a sought-after presenter, lecturer, and researcher at premier organizations such as: United States Olympic Committee (USOC), U.S Track & Field and Cross Country Association, University of Florida, University of Miami, American Heart Association, American Lung Association, and the American College of Sports Medicine.Shannon graduated from the University of Florida with a B.S and M.S in Exercise Physiology/Biochemistry. Shannon is an NCAA All-American, 6-time Team USA Triathlon with 4 Top-10 ITU World Championship finishes.