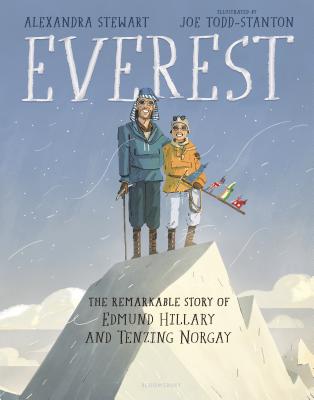 In the late morning of May 29, 1953, the sun was shining brightly and a gentle breeze was blowing on the highest elevation of the world--and two men were there to witness it for the first time ever. Their names were Edmund Hillary and Tenzing Norgay, and they had ascended Everest. This is the breathtaking story of how two very different, yet equally determined, men battled frost-biting temperatures, tumbling ice rocks, powerful winds, and death-defying ridges to reach the top of the world's highest mountain.

Combining fresh and contemporary illustrations by Joe Todd-Stanton with Alexandra Stewart's captivating writing, this unique narrative tells the story of how Edmund Hillary and Tenzing Norgay made their mark on the world from birth right up to their final days and the impact they've had on Nepal today.

Alexandra Stewart studied Modern History at Oxford University before training to be a journalist. After working as a reporter on a number of newspapers, she worked as a press officer for the Metropolitan Police and, later, Central Government. She subsequently worked as a speechwriter. Alex lives in London, UK with her husband and two children.

Joe Todd-Stanton is the author and illustrator of The Secret of Black Rock (Flying Eye). He is the winner of the Waterstones Children's Book Prize 2018 and has been long listed for the 2018 CILIP Kate Greenaway Medal. He lives in England.