The Broadview Anthology of Social and Political Thought - Volume 2: The Twentieth Century and Beyond (Paperback) 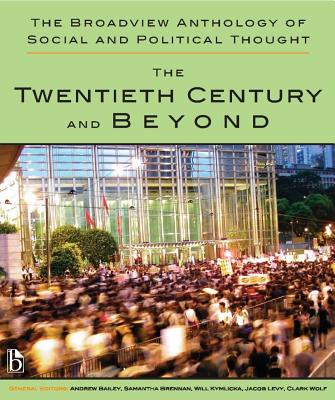 The Broadview Anthology of Social and Political Thought - Volume 2: The Twentieth Century and Beyond (Paperback)


Not On Our Shelves—Ships in 1-5 Days
(This book cannot be returned.)
This comprehensive volume contains much of the important work in political and social philosophy from ancient times until the end of the nineteenth century. The anthology offers both depth and breadth in its selection of material by central figures, while also representing other currents of political thought. Thucydides, Seneca, and Cicero are included along with Plato and Aristotle; Al-Farabi, Marsilius of Padua, and de Pizan take their place alongside Augustine and Aquinas; Astell and Constant are presented in the company of Locke, Rousseau, and Wollstonecraft.The editors have made every effort to include translations that are both readable and reliable. Every selection has been painstakingly annotated, and each figure is given a substantial introduction highlighting his or her major contribution within the tradition. In order to ensure the highest standards of accuracy and accessibility, the editors have consulted dozens of leading academics during the course of the anthology's development (a number of whom have contributed introductory material as well as advice). The result is an anthology with unparalleled pedagogical benefits, and one that truly breaks new ground.
General Editors: Andrew Bailey, University of Guelph Samantha Brennan, University of Western Ontario Will Kymlicka, Queen's University Jacob Levy, McGill University Alex Sager, Portland State University Clark Wolf, Iowa State University