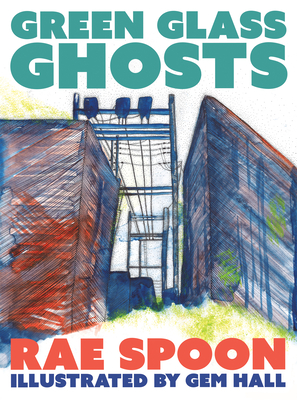 At age nineteen, the queer narrator of Green Glass Ghosts steps off a bus in downtown Vancouver, a city where the faceless condo towers of the wealthy loom over the streets to the east where folks are just trying to get by, against the deceptively beautiful backdrop of snow-capped mountains and sparkling ocean. It's the year 2000, and the world is still mostly analogue--pagers are the best way to get ahold of someone and resum's are printed out on paper and dropped off in person, and what's this new fad called webmail?

Our hopeful hero arrives on the West Coast on the cusp of adulthood, fleeing a traumatic childhood in an unsafe family plagued by religious extremism, mental health crises, and abuse in a conservative town not known for accepting difference. They're eager to build a new life among like-minded folks, and before they know it, they've got a job, an apartment, and a relationship, dancing, busking, and making out in bars, parks, art spaces, and apartments across the city. But their search for belonging and stability is buried in drinking, jealousy, and painful memories of the past, distracting the protagonist from their ultimate goal of playing live music and spurring them to an emotional crisis. If they can't learn to care for themselves, how will they ever find true connection and community?

With haunting illustrations by Gem Hall that conjure the moody, misty urban landscape, Green Glass Ghosts is an evocation of that delicate, aching moment between youth and adulthood when we are trying, and often failing, to become the person we dream ourselves to be.

Rae Spoon is a non-binary performer, composer, music producer, and visual content producer/director. They are the co-author (with Ivan Coyote) of Gender Failure and the author of First Spring Grass Fire. As a musician, they have released 11 albums, and is the founder of the music label Coax Records. They were the subject of My Prairie Home, a National Film Board of Canada documentary that premiered at Sundance in 2014. Gem Hall is a Vancouver-based artist and illustrator.