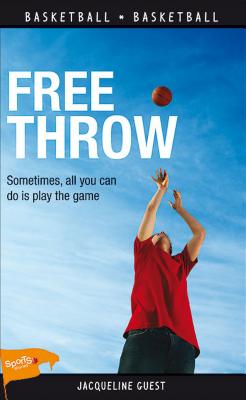 Matthew Eagletail is the star player for the Warriors, his basketball team on the Tsuu T'ina First Nation near Calgary. When his mother remarries, everything in Matthew's life is suddenly different and new: a new school, a new father, five pesky new sisters, a new dog named Precious. Worst of all, he has to quit the Warriors. When he's asked to join his new school's team, the Bandits, he claims he'll never play for the competition. His sister Jazz thinks otherwise, and sets out to prove it.

JACQUELINE GUEST is a Metis writer who lives in Bragg Creek, Alberta. She is the author of 10 previous Lorimer novels, including Hat Trick, Free Throw, Rookie Season, and A Goal in Sight, which are Canadian Children's Book Centre Our Choice selections, and the SideStreets novels Lightening Rider, Racing Fear and At Risk. A Goal in Sight was also nominated for a Golden Eagle Award.