The Broadview Guide to Writing: A Handbook for Students - Sixth Edition (Spiral) 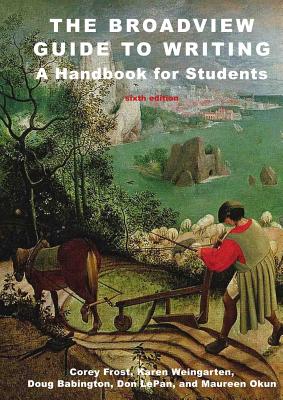 The Broadview Guide to Writing: A Handbook for Students - Sixth Edition (Spiral)

"Even the most useful reference guides are not always, well, shall we say, riveting. A refreshing exception is the new Broadview Guide to Writing, which is smart, helpful, and even fun to read." --Gerald Graff and Cathy Birkenstein, authors of They Say / I Say: The Moves That Matter in Academic Writing

Increasingly, writing handbooks are seen as over-produced and overpriced. One stands out: The Broadview Guide to Writing is published in an elegant but simple format, and sells for roughly half the price of its fancier-looking competitors. That does not change with the new edition; what does change and stay up-to-date is the content of the book. The sixth edition brings a substantial re-organization of the contents under three headings: Writing Processes, Writing Mechanics, and Writing Contexts. Coverage of APA, Chicago, and CSE styles of documentation has been substantially expanded, and the MLA section has now been fully revised to take into account all the 2016 changes. Also expanded is coverage of academic argument; of writing and critical thinking; of writing about literature, of paragraphing; of how to integrate quoted material into one's own work; of balance and parallelism; and of issues of gender, race, religion etc. in writing. The chapter "Seeing and Meaning: Reading (and Writing About) Visual Images" is entirely new to the sixth edition.

Corey Frost, formerly Coordinator of the Writing Across the Curriculum Program at Brooklyn College, is now a professor in the English Department at New Jersey City University. Karen Weingarten is a professor in the Department of English at Queens College, City University of New York; a former co-Coordinator of the Introductory English program, she is also the author of Abortion in the American Imagination. Doug Babington, an Emeritus Professor in the English Department at Queen's University, was for many years Director of the Writing Centre there. Don LePan's other books include The Broadview Pocket Glossary of Literary Terms, How to Be Good With Words, and two novels, Animals and Rising Stories. Maureen Okun is a professor in both the English and the Liberal Studies Departments at Vancouver Island University; her books include Sir Thomas Malory: Le Morte Darthur: Selections and The Broadview Pocket Guide to Citation and Documentation.