City of Bohane: A Novel (Paperback) 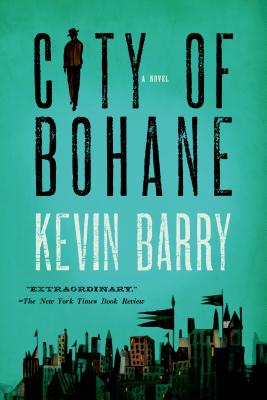 City of Bohane: A Novel (Paperback)

Forty or so years in the future. The once-great city of Bohane on the west coast of Ireland is on its knees, infested by vice and split along tribal lines. There are the posh parts of town, but it is in the slums and backstreets of Smoketown, the tower blocks of the North Rises, and the eerie bogs of the Big Nothin' that the city really lives. For years it has all been under the control of Logan Hartnett, the dapper godfather of the Hartnett Fancy gang. But there's trouble in the air. They say Hartnett's old nemesis is back in town; his trusted henchmen are getting ambitious; and his missus wants him to give it all up and go straight. Kevin Barry's City of Bohane combines Celtic myth and a Caribbean beat, fado and film, graphic-novel cool and all the ripe inheritance of Irish literature to create something hilarious, beautiful, and startlingly new.

Kevin Barry's short fiction has appeared in The New Yorker and elsewhere. City of Bohane was short-listed for the Irish Novel of the Year and the Costa First Novel awards, and won the Author's Club Best First Novel Award. He lives in County Sligo in Ireland.

“The best novel to come out of Ireland since Ulysses.” —Irvine Welsh

“A grizzled piece of futuristic Irish noir with strong ties to the classic gang epics of yore . . . Virtuosic.” —The New Yorker

“As you prowl the streets of Bohane with Barry's motley assortment of thugs and criminal masterminds, you will find yourself drawn into their world and increasingly sympathetic to their assorted aims and dreams.” —The Boston Globe

“The real star here is Barry's language, the music of it. Every page sings with evocative dialogue, deft character sketches, impossibly perfect descriptions of the physical world.” —The Millions