The Ontogenetic Basis of Human Anatomy: A Biodynamic Approach to Development from Conception to Birth (Hardcover) 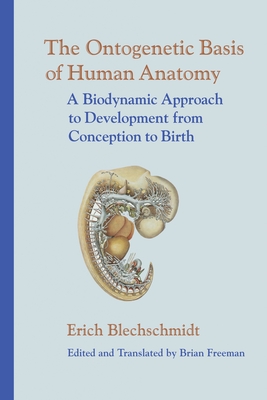 The Ontogenetic Basis of Human Anatomy: A Biodynamic Approach to Development from Conception to Birth (Hardcover)


Special Order—Subject to Availability
This book presents an anatomical overview of the changing form and structure of the human body. Although biomechanical embryology can be traced back to the 19th century, up until recently the most commonly accepted framework for the study of human ontogeny (development of the individual) was molecular biology, which all too frequently relied on findings from animal experiments that remained untested for humans. German embryologist and anatomist Erich Blechschmidt's research concentrates on the evidence presented by the human embryo itself. He offers a new approach to the study of early human growth as a way to shed light on the development of body build, instincts, gestures, language, mathematics, tools, and dress.
Erich Blechschmidt was an anatomist and embryologist who worked for more than forty years on the problem of human form and the way that form arises in the course of ontogeny, principally during the first eight weeks or so after conception. He has provided us with more than 120 scientific papers and numerous books concerning the development of human form and function. One unique aspect of Blechschmidt's research is that it concentrates on the evidence presented by the human embryo itself, in the form of a comprehensive collection of about 200,000 serial sections of embryos at different ages and sixty-four enlarged total reconstructions at the University of Guttingen (The Blechschmidt Collection and Museum). The sustained investigation of this wealth of material led to a totally new way of looking at early human development, which compels us to re-think older interpretations based mainly on phylogenetic or molecular biological studies. It is possible to see how adult functions arise naturally and consistently from the embryo's earlier growth functions. This present book is a condensation of many of these findings and a presentation of the new viewpoint.
—Brian Freeman, Ph.D. Anatomy, UNSW, from the Preface
"Erich Blechschmidt profoundly reaches through the doorway of the most sacred and the most scientific."
-James Jealous, D.O.