World War II for Kids: A History with 21 Activities (For Kids series #2) (Paperback) 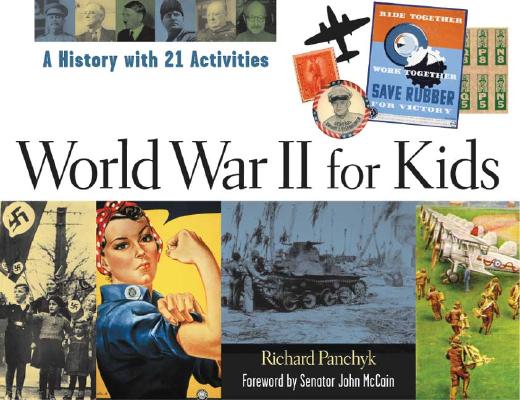 World War II for Kids: A History with 21 Activities (For Kids series #2) (Paperback)

This is book number 2 in the For Kids series series.

Now more than ever, kids want to know about our country's great struggles during World War II. This book is packed with information that kids will find fascinating, from Hitler's rise to power in 1933 to the surrender of the Japanese in 1945. Much more than an ordinary history book, it is filled with excerpts from actual wartime letters written to and by American and German troops, personal anecdotes from people who lived through the war in the United States, Germany, Britain, Russia, Hungary, and Japan, and gripping stories from Holocaust survivors—all add a humanizing global perspective to the war. This collection of 21 activities shows kids how it felt to live through this monumental period in history. They will play a rationing game or try the butter extender recipe to understand the everyday sacrifices made by wartime families. They will try their hands at military strategy in coastal defense, break a code, and play a latitude and longitude tracking game. Whether growing a victory garden or staging an adventure radio program, kids will appreciate the hardships and joys experienced on the home front.

Richard Panchyk is the author of Archaeology for Kids and the coauthor of Engineering the City. Both of his grandfathers and three of his great-uncles were soldiers in World War II. He lives on Long Island in New York.

“It is my hope that the history of World War II, rendered accessible to younger students in Richard Panchyk's readable account, will inspire another generation of Americans as we wage a new struggle against the enemies of freedom.”  —Senator John McCain

“This well-written, well-researched book belongs on every reference bookshelf in American schools and libraries. It is a must-read book for kids and adults.” —Children's Literature

“Jam-packed with information that kids will find fascinating.”  —Today's Parent

“Lifts its subject out of the arid textbook world and into the living and breathing present.” —Big Apple Parent