The Opening of Hegel's Logic: From Being to Infinity (History of Philosophy Series) (Paperback) 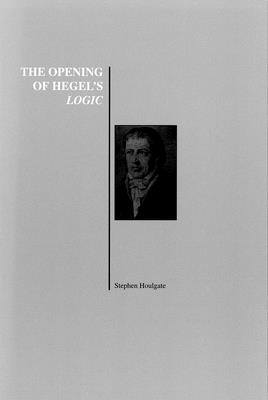 The Opening of Hegel's Logic: From Being to Infinity (History of Philosophy Series) (Paperback)

Hegel is one of the most important modern philosophers, whose thought influenced the development of existentialism, Marxism, pragmatism, hermeneutics, and deconstruction. Yet Hegel's central text, the monumental Science of Logic, still remains for most philosophers (both figuratively and literally) a firmly closed book. The purpose of The Opening of Hegel's Logic is to dispel the myths that surround the Logic and to show that Hegel's unjustly neglected text is a work of extraordinary subtlety and insight.

Part One of The Opening of Hegel's Logic argues that the Logic provides a rigorous derivation of the fundamental categories of thought and contrasts Hegel's approach to the categories with that of Kant. It goes on to examine the historical and linguistic presuppositions of Hegel's self-critical, "presuppositionless" logic and, in the process, considers several signifi-cant criticisms of such logic advanced by Schelling, Feuerbach, Gadamer, and Kierkegaard. Separate chapters are devoted to the relation between logic and ontology in Hegel's Logic and to the relation between the Logic itself and the Phenomenology. Part Two contains the text - in German and English - of the first two chapters of Hegel's Logic, which cover such categories as being, becoming, something, limit, finitude, and infinity. Part Three then provides a clear and accessible commentary on these two chapters that both examines Hegel's arguments in detail and relates his insights to those of other philosophers, such as Descartes, Spinoza, Kant, Nietzsche, and Levinas.

The Opening of Hegel's Logic aims to help students and scholars read Hegel's often formidably difficult text for themselves and discover the wealth of philosophical riches that it contains. It also argues that Hegel's project of a presuppositionless science of logic is one that deserves serious consideration today.