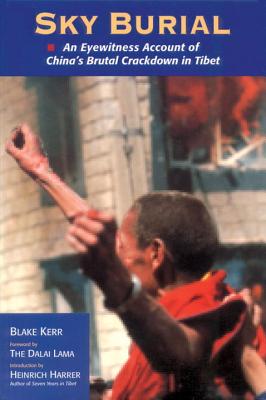 
Special Order—Subject to Availability
This is a riveting firsthand account by Blake Kerr, an American doctor who inadvertently walked into one of the grimmest scenes of political oppression in the world. Kerr was visiting Tibet with his old college friend John Ackerly. They were enjoying the sights and sounds of Lhasa, the capital of Tibet, and hitchhiking to Everest, where they "humped loads" for an American expedition assaulting the mountain. Upon returning to Lhasa, Kerr and Ackerly witnessed a series of demonstrations by Tibetan monks greater than anything witnessed by foreigners since China entered Tibet in 1949.
Blake Kerr is a graduate of Dartmouth College and SUNY Buffalo School of Medicine. In 1987 he traveled to Tibet, where he witnessed the violent repression of Tibetan nationalist demonstrations by Chinese police in Lhasa. Since then he has journeyed several times to Tibetan refugee communities in India and returned twice to Tibet in order to document human rights abuses. He currently works as a general practitioner on eastern Long Island, where he lives with his wife, Kate.
"Sky Burial is the distilled truth—alternately tragic, hilarious, and rousing—of two young Americans' exposure to the joyous spirit of the Tibetan people and their courageous struggle to survive under the brutal subjugation of Chinese communist rule. It is a vivid portrait of a critical moment in Tibet's modern history. An evocative, endearing, and invaluable book."—John Avedon, author of In Exile from the Land of Snows

"The story is told uncommonly well by Kerr—a well-crafted text by a writer sure of his talents."—Tibet Journal