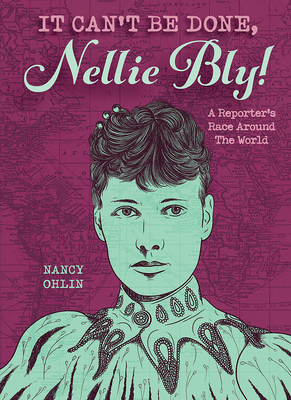 
In Stock—Click for Locations
This is the true story of Nellie Bly, a bold woman, reporter, and adventurer who set a world record for her famous journey around the globe.

Nellie Bly was a nineteenth century newspaper reporter for the New York World, but instead of writing about "ladylike" subjects like tea parties and charity balls, Nellie wrote about critical social problems of her day—poor job conditions, dilapidated housing, and dishonest politicians. If someone told her "It can't be done, Nellie Bly," she went right ahead and did it anyway.

So when Nellie read Jules Verne's novel, Around the World in Eighty Days, she was inspired to circle the globe herself in an attempt to beat the record of the fictional character Phileas Fogg. But would she go too far in her quest?

Young fans of history will cheer for Nellie Bly as she embarks on her 22,000-mile trip. Equipped only with one sturdy travel dress, a small satchel, and a pet monkey she picks up in Singapore, Bly travels by ship, train, and foot, experiencing incredible events and places—from a monsoon at sea to a leper colony in China.

This delightful true story of a woman with an indomitable spirit will inspire a new generation of young women and adventurers. Back matter includes additional information about Nellie Bly's life.
Nancy Ohlin was born in Tokyo, Japan, and divided her childhood between there and Ohio. She received a BA in English from the University of Chicago. She is the author of the YA novels B*Witch and its sequel Witch Rising (co-authored with Paige McKenzie); Consent; Beauty; and Always, Forever; as well as the Blast Off! early-grade history series. She has collaborated with Quvenzhane Wallis, Chloe Lukasiak, and other celebrities, and written or ghostwritten over a hundred books for children, teens, and adults. She lives with her family and many cats in Ithaca, New York.
"The book contains additional information about the reporter's life, making it a satisfying biography suitable for reports and recreational reading. Fun, factual, and well written." —School Library Journal