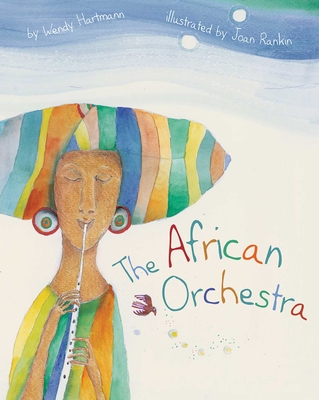 
Special Order—Subject to Availability
With magical illustrations from Joan Rankin, and poetry from masterful storyteller, Wendy Hartmann, The African Orchestra lyrically captures the magic of the African sounds of nature. From the clicking of crickets to the crackle of the fire, follow the journey that celebrates these sounds, in the rhythm and music of Africa.
Joan Rankin has illustrated over 30 books for children, including the acclaimed The African Orchestra and This is the Chick. She received the South African HAUM Daan Retief Prize for Children’s Book Illustration in 1986 and the Katrine Harries Award for Children’s Book Illustration in 1991.

Wendy Hartmann has been writing for many years, with more than 40 children’s books published, including, most recently, The African Orchestra. Her work ranges from concept and counting, beginner readers, high interest/low vocabulary readers to picture books. Her books have been selected for honor’s lists and nominated for awards for writing and illustration. Wendy lives in Cape Town, is married and has two daughters. In her spare time, she paints and has taken part in numerous exhibitions and has works in private collections in South Africa as well as overseas. Joan Rankin has illustrated over 30 books for children, including the acclaimed The African Orchestra. She received the South African HAUM Daan Retief Prize for Children’s Book Illustration in 1986 and the Katrine Harries Award for Children’s Book Illustration in 1991.
PreS-Gr 2—Nature is music to humans and is celebrated in this lyrical picture book about Africa's sounds and the instruments used to re-create them. Hartmann produces harmony and rhythm relying on rhyming couplets to introduce native flora and fauna. The prevalence of onomatopoeia helps the verse "snap," "crackle," and "huummmm," making this an attractive selection for storytime. Rankin's watercolor illustrations envelop each page gently, seamlessly intertwining with and reinforcing the text. On one spread, "We are the herds/that gallop and run/We 'rumble' and 'boo-oom' in the African drum." On the left, brown hands thrum on a drum, while galloping hooves of bright and varying hues mimic the same pattern of human arms and sound. One can hear the "rumble" and "boo-oom" replicated in the drummer's beat. Like Lloyd Moss's Zin! Zin! Zin! A Violin, this is a great examination of onomatopoeia and instrumentation, but pair it with Eric Carle's I See a Song for a true sensory experience. The only minor drawback is a generalization of Africa inherent in such works. However, it's worth noting both contributors are native to the continent. VERDICT A beautiful addition to any library serving young children.—Rachel Zuffa, Racine Public Library, WI