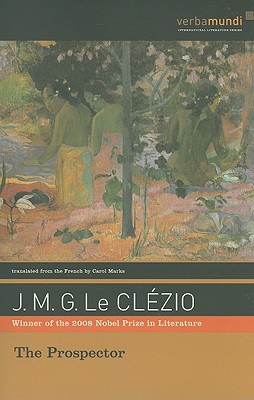 The Prospector is the crowning achievement from one of France's preeminent novelists and a work rich with sensuality and haunting resonance. It is the turn of the century on the island of Mauritius, and young Alexis L'Etang enjoys an idyllic existence with his parents and beloved sister: sampling the pleasures of privilege, exploring the constellations and tropical flora, and dreaming of treasure buried long ago by the legendary Unknown Corsair. But with his father's death, Alexis must leave his childhood paradise and enter the harsh world of privation and shame. Years later, Alexis has become obsessed with the idea of finding the Corsair's treasure and, through it, the lost magic and opulence of his youth. He abandons job and family, setting off on a quest that will take him from remote tropical islands to the hell of World War I, and from a love affair with the elusive Ouma to a momentous confrontation with the search that has consumed his life. By turns harsh and lyrical, pointed and nostalgic, The Prospector is "a parable of the human condition" (Le Monde) by one of the most significant literary figures in Europe today.