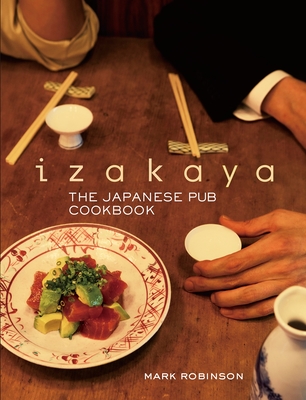 
Backordered
Japanese pubs, called izakaya, are attracting growing attention in Japan and overseas. As a matter of fact, a recent article in The New York Times claimed that the izakaya is "starting to shove the sushi bar off its pedestal." While Japan has many guidebooks and cookbooks, this is the first publication in English to delve into every aspect of a unique and vital cornerstone of Japanese food culture.

A venue for socializing and an increasingly innovative culinary influence, the izakaya serves mouth-watering and inexpensive small-plate cooking, along with free-flowing drinks. Readers of this essential book will be guided through the different styles of establishments and recipes that make izakaya such relaxing and appealing destinations. At the same time, they will learn to cook many delicious standards and specialties, and discover how to "design" a meal as the evening progresses.

Eight Tokyo pubs are introduced, ranging from those that serve the traditional Japanese "comfort foods" such as yakitori (barbequed chicken), to those offering highly innovative creations. Some of them have long histories; some are more recent players on the scene. All are quite familiar to the author, who has chosen them for the variety they represent: from the most venerated downtown pub to the new-style standing bar with French-influenced menu. Mark Robinson includes knowledgeable text on the social and cultural etiquette of visiting izakaya, so the book can used as a guide to entering the potentially daunting world of the pub. Besides the 60 detailed recipes, he also offers descriptions of Japanese ingredients and spices, a guide to the wide varieties of sake and other alcoholic drinks that are served, "how-to" advice on menu ordering, and much more.

For the home chef, the hungry gourmet, the food professional, this is more than a cookbook. It is a unique peek at an important and exciting dining and cultural phenomenon.
MARK ROBINSON lives in Tokyo and was the editor of the Japanese culinary magazine Eat, as well as deputy editor and music editor of Tokyo Journal magazine. He has been a regular food and culture contributor from Japan to publications such as Nest (U.S.), the Financial Times, The Times (U.K.), the Australian Financial Review Magazine, and others. Born in Tokyo and raised mostly in Sydney, Australia, he returned to Japan 20 years ago where, enchanted by the pleasures of izakaya, he has lived almost continuously.

Photographer MASASHI KUMA was nominated for a James Beard Award for Photography for his work in the Kodansha book, Kaiseki, published in 2006. His photographs appear regularly in a number of periodicals, including Voce and GQ.
"Izakaya - the Japanese Pub Cookbook celebrates…unlikely foodie haunts and their cuisine, combining shochu-soaked anecdotes and pen portraits of izakaya chefs with recipes for their tasty snacks and appetizers." —Reuters


"…delightful…Robinson’s book is more a paean to the vibrant and complicated izakaya culture than a definitive cooking guide…but the recipes, more than 60 of them, are the sort you wish more neighborhood restaurant chefs in New York would read." —The New York Times Book Review