Empire of Illusion: The End of Literacy and the Triumph of Spectacle (Paperback) 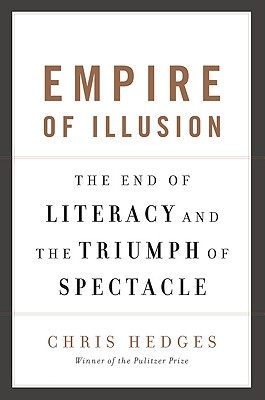 Empire of Illusion: The End of Literacy and the Triumph of Spectacle (Paperback)


Backordered
A prescient book that forecast the culture that gave rise to Trump -- a society beholden to empty spectacle and obsession with image at the expense of reality, reason, and truth. An instant bestseller, Empire of Illusion is a striking and unsettling exploration of illusion and fantasy in contemporary American culture. Traveling to the ringside of professional wrestling bouts at Madison Square Garden, to Las Vegas to write about the pornographic film industry, and to academic conferences held by positive psychologists who claim to be able to engineer happiness, Hedges chronicles our flight from an ever-worsening reality. The cultural embrace of illusion and celebrity culture have accompanied a growing system of casino capitalism, which creates vast wealth for elites. Corporations have ruthlessly dismantled and destroyed our manufacturing base and impoverished our working class. Hedges exposes the mechanisms that undermine our democracy and divert us from the economic, environmental, political, and moral collapse around us. A culture that cannot distinguish between reality and illusion dies, Hedges argues, and we are dying now.
Chris Hedges is a Pulitzer Prize-winning journalist. He spent nearly two decades as a correspondent in Central America, the Middle East, Africa, and the Balkans, with fifteen years at the New York Times. He is the author of numerous bestselling books, including Empire of Illusion; Death of the Liberal Class; War is a Force that Gives Us Meaning; and Days of Destruction, Days of Revolt, which he co-wrote with Joe Sacco. He writes a weekly column for the online magazine Truthdig. He lives in Princeton, New Jersey.
"A trenchantly argued critique of the
near-destruction of the American Dream by unfettered capitalism."—Philadelphia Inquirer

"Remarkable, bracing and highly moral, Empire of Illusion is Hedges' lament for his nation."—Macleans

"Thoroughly documented and written in a measured
but take-no-prisoners tone.... It's bound to stir up its share of
interest-generating controversy."—Booklist

"Each chapter of Empire of Illusion makes a strong case for how different illusions...taken together are destroying the American mind, culture and the nation itself."—National Post