In the Shadow of the Ivory Tower: How Universities Are Plundering Our Cities (Hardcover) 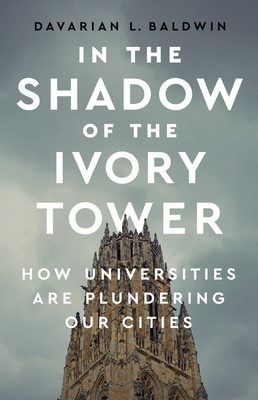 In the Shadow of the Ivory Tower: How Universities Are Plundering Our Cities (Hardcover)


Not On Our Shelves—Ships in 1-5 Days
Across America, universities have become big businesses—and our cities their company towns. But there is a cost to those who live in their shadow.

Urban universities play an outsized role in America’s cities. They bring diverse ideas and people together and they generate new innovations. But they also gentrify neighborhoods and exacerbate housing inequality in an effort to enrich their campuses and attract students. They maintain private police forces that target the Black and Latinx neighborhoods nearby. They become the primary employers, dictating labor practices and suppressing wages.

In the Shadow of the Ivory Tower takes readers from Hartford to Chicago and from Phoenix to Manhattan, revealing the increasingly parasitic relationship between universities and our cities. Through eye-opening conversations with city leaders, low-wage workers tending to students’ needs, and local activists fighting encroachment, scholar Davarian L. Baldwin makes clear who benefits from unchecked university power—and who is made vulnerable.

In the Shadow of the Ivory Tower is a wake-up call to the reality that higher education is no longer the ubiquitous public good it was once thought to be. But as Baldwin shows, there is an alternative vision for urban life, one that necessitates a more equitable relationship between our cities and our universities.
Davarian L. Baldwin is a leading urbanist, historian, and cultural critic. The Paul E. Raether Distinguished Professor of American Studies and founding director of the Smart Cities Lab at Trinity College, Baldwin is the author of Chicago's New Negroes: Modernity, the Great Migration, and Black Urban Life (UNC, 2007) and co-editor, with Minkah Makalani, of the essay collection Escape From New York! The New Negro Renaissance beyond Harlem (Minnesota, 2013). He has received grants and fellowships from Harvard University, the University of Virginia, the University of Notre Dame, and the Logan Nonfiction Writing Fellowship from the Carey Institute for the Global Good. He lives with his wife and children in Springfield, Massachusetts.
"A well-informed and highly critical study of higher education’s “increasingly powerful hold” over U.S. cities…Combining in-depth research, practicable models of reform (e.g. the University of Winnipeg’s sustainable development program), and the lively voices of community organizers and college insiders, Baldwin makes a convincing case. This passionate call to hold universities more accountable resonates."—Publishers Weekly

“A cogent analysis of an urban-growth phenomenon that is rarely done well or equitably."—Kirkus Reviews

“A provocation: a necessary call to give cities and universities pause before they plow ahead with any seemingly righteous real estate project.”—Planetizen

“Baldwin brings his incisive insights and analysis to bear in a devastating critique of our dated and quaint notions of universities and colleges as egalitarian sites of learning and cultural production. He unmasks ‘UniverCities’ as growth machines, unleashing gentrification, stewarding large police forces, cheating tax coffers while exploiting low wage Black and Brown labor throughout the campus.”

“An unflinching and comprehensive look at how capital has reached its talons into every facet of our lives, from the halls of our elite universities to the street corners of our local communities. A must-read for anyone interested in envisioning a more equitable future for education and city life.”

—P. E. Moskowitz, author of How To Kill A City

“Insightful, compelling, and timely. This book lays the groundwork for the role of universities in creating equitable and just cities.”

—Ibram X. Kendi, National Book Award-winning author of Stamped from the Beginning and How to Be an Antiracist

“One of the nation’s foremost urban historians, Davarian Baldwin reveals how these institutions have acquired massive financial and real estate holdings and leveraged them to displace vulnerable communities, control public access to essential services, define progress, and, even, command their own police forces.  This brilliant study shows that higher education continues to thrive off the injustices that plague our society.”