The Shambhala Guide to Aikido (Paperback) 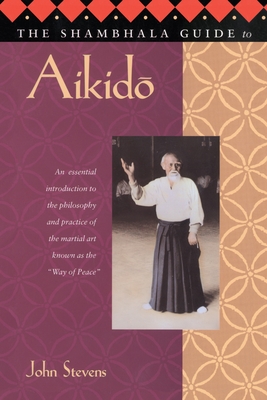 The Shambhala Guide to Aikido (Paperback)


Not On Our Shelves—Ships in 1-5 Days
(This book cannot be returned.)
Aikido is the "Art of Peace," a discipline that emphasizes harmony and the peaceful resolution of conflict. Far more than a self-defense technique, Aikido is a physical and spiritual discipline that aims at unifying the body and spirit with the natural forces of the universe, fostering compassion, wisdom, and fearlessness.

This book introduces the basic principles and practices of this popular martial art and includes:

•  The biography of the Founder of Aikido, Morihei Ueshiba (1883-1969), highlighting key events that led to the development of Aikido
•  The fundamental training methods and techniques, illustrated by dozens of photographs
•  The philosophical and spiritual dimensions of Aikido
•  How to choose an instructor
•  A glossary of important terms
•  Suggestions for further reading
John Stevens is Professor of Buddhist Studies and Aikido instructor at Tohoku Fukushi University in Sendai, Japan. He is the author or translator of over twenty books on Buddhism, Zen, Aikido, and Asian culture. He has practiced and taught Aikido all over the world.
Over the years, John Stevens Sensei has written enough books on Aikido and related topics to fill the martial-arts shelves of most bookstores. The latest in the series, The Shambhala Guide to Aikido, is an introduction. Stevens' hope, he explains in the book's introduction, is that this will be "the first book that Aikido instructors recommend to beginning students, as well as the one that Aikido practitioners present to their parents, friends, co-workers, partners, and spouses when confronted with the question, 'What is Aikido?'"

Like some of Stevens' other books, The Shambhala Guide to Aikido contains many photos, which are accompanied by lengthy captions (some several hundred words long). A university professor in Japan, Stevens has access to much historical material, and the book contains twenty-four interesting pictures of O-Sensei at various stages of his life.

The Shambhala Guide to Aikido is divided into four parts: a biography of the Founder, a section on the art of Aikido, a section on Aikido philosophy (which includes selections from O-Sensei's writings), and a discussion of "schools and styles" of Aikido. There is also a list of resources and a glossary.