Straight to the Heart of Zen: Eleven Classic Koans and Their Innner Meanings (Paperback) 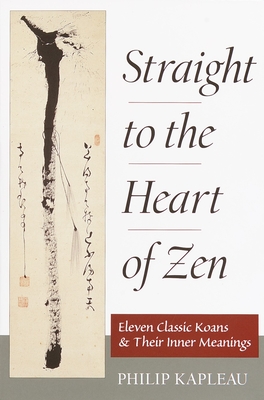 Straight to the Heart of Zen: Eleven Classic Koans and Their Innner Meanings (Paperback)


Not On Our Shelves—Ships in 1-5 Days
(This book cannot be returned.)
Koans are at the very heart of Zen practice; this collection of informal koan talks will bring the Zen student into the presence of Roshi Philip Kapleau, the famous author of The Three Pillars of Zen . The talks in this collection came directly from the zendo (training hall) and from the intense form of practice known as sesshin, a Japanese word meaning "to train the mind." These are direct presentations of the practice and understanding of one of the century's greatest American masters.

These Zen talks focus on koans that illuminate fundamental issues of the spiritual life. While koans may be said to be uniquely Zen, in Roshi Kapleau's talks they become as familiar, everyday, and relevant as the questions we ponder—in one form or another—all our lives. Why was I born? Why must I die? How can I find an end to suffering?

The book has three main sections. As Zen begins with the Buddha's life and enlightenment, the three teishos (talks) in Part One are each drawn from an incident in the life of the Buddha. Since Zen in the West is a lay movement, not a monastic one as it is in Japan, Part Two presents koans and commentary drawn from the lives of three great lay figures in Zen. Part Three contains five teishos on traditional koans that reflect fundamental concerns common to all of us, man or woman, monastic or lay, Buddhist or otherwise: What is the road to enlightenment? What will happen to me when I die?
Philip Kapleau's classic Three Pillars of Zen has sold an estimated five hundred thousand copies. He is the author of Awakening to Zen, Zen: Merging of East and West, The Wheel of Life and Death, and The Zen of Living and Dying. Kapleau was the first Westerner to be ordained a roshi. He established the Rochester Zen Center in 1966. He lives in Rochester, New York.
"Kapleau offers wise commentary on emptiness, joy, practice, nonduality, silence, and student-teacher relationships. What a treat to have these eleven classic koans opened up for us by this Zen master!"— Spirituality & Health