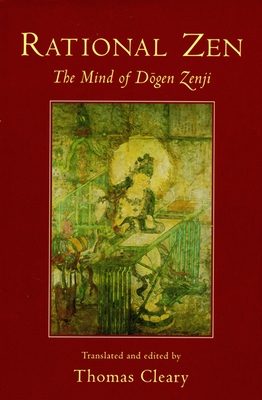 
Not On Our Shelves—Ships in 1-5 Days
Zen has often been portrayed as being illogical and mystifying, even aimed at the destruction of the rational intellect. These new translations of the thirteenth-century Zen master Dogen—one of most original and important Zen writers—illustrate the rational side of Zen, which has been obscured through the centuries, tainting people's understanding of it.

Rational Zen consists of enlightening selections from Dogen's two masterworks, "Treasury of Eyes of True Teaching" (the famed Shobogenzo, Japan's most sophisticated philosophical work) and "Universal Book of Eternal Peace," which until now has been unavailable in English. The translator also provides explanations of the inner meanings of Dogen's writings and sayings—the first commentaries of their kind of English. A compendium of authentic source materials further enhances the reader's insight into Dogen's methods, linking them to the great classical traditions of Buddhism that ultimately flowered in Zen.
Thomas Cleary holds a PhD in East Asian Languages and Civilizations from Harvard University and a JD from the University of California, Berkeley, Boalt Hall School of Law. He is the translator of over fifty volumes of Buddhist, Taoist, Confucian, and Islamic texts from Sanskrit, Chinese, Japanese, Pali, and Arabic.
"This collection . . . is an occasion for celebration by American Buddhists. . . . those concerned with the living meaning embedded in these writings can only feel gratitude for the riches Cleary has provided."— Tricycle

"Thomas Cleary's strong rendering of important sections of Dogen Zenji's essential writings, with his excellent and comprehensive notes, opens the gate to a far wider understanding and appreciation of the extraordinary work of the founder of Japanese Zen."—Peter Matthiessen, author of Nine-Headed Dragon River

"My reverence for both Dogen and Cleary is virtually unbounded. . . . It is becoming hard, in fact, to read anyone's translations but Cleary's."—Jim Harrison, author of Legends of the Fall