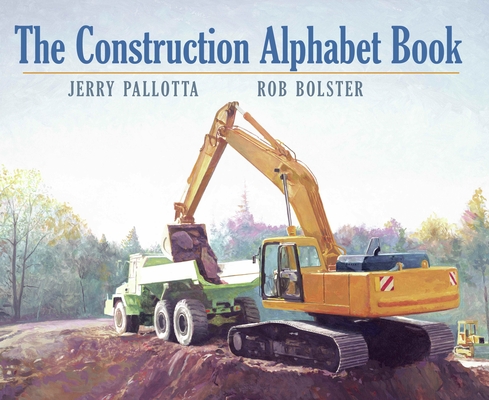 
Not On Our Shelves—Ships in 1-5 Days
For fans of all things that go this noisy alphabet book explores construction equipment from A to Z.  Find out about these construction machines and more, from a huge saw that cuts through roads to a massive vacuum that sucks up boulders. You'll even learn a quick and easy recipe for concrete. Rock crushers, jackhammers, and wrecking balls will delight the youngest of readers learning their ABCs.
Jerry Pallotta's trademark humor punctuates the informative text. Vibrant oil paintings bring to life a busy construction site.
Jerry Pallotta is an award-winning author of children's alphabet books and imaginative fiction. His books combine interesting facts, detailed research, humor, and realistic illustrations that mesmerize children everywhere. Jerry lives in Boston, Massachusetts.


Rob Bolster is a graduate of the Rhode Island School of Design, Bolster has worked in illustration for more than 20 years. For most of that time, his work has appeared in newspaper and magazine advertisements for major corporations. He produced most of those illustrations using airbrush and watercolor. However, in recent years Bolster has taught himself how to do his work using a computer. Much of his illustration is now created digitally. Rob lives in Walpole, Massachusetts.