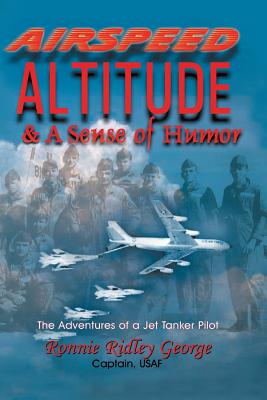 
Not On Our Shelves—Ships in 1-5 Days
As a schoolboy, Ron George seemed an unlikely airplane pilot. By his own admission, he was scared of heights and was so uncoordinated he couldn't hit a baseball or fly a paper airplane. He went on, however, to become a United States Air Force pilot who flew supersonic T-38 aircraft and logged more than 1,400 hours of jet aircraft time during his five-year Air Force career. His flying included 200 hours of combat air time in Southeast Asia as the co-pilot on an unarmed KC-135 jet tanker refueling American fighters and bombers striking targets in North Vietnam. He and his aircrew witnessed the Communist "Tet Offensive" in South Vietnam in 1968 and participated in the "Pueblo Incident" in Korea. When Ron upgraded to aircraft commander, he was thought to be the youngest aircraft commander in the Strategic Air Command since World War II. He served in Texas, Alaska, Greenland, Newfoundland, Okinawa, and Southeast Asia. Captain George's military decorations include the Air Medal, Vietnam Service Medal, and the Air Force Expeditionary Medal. This book captures the sights, sounds, smells, feelings, and dry humor of flying and Air Force squadron life during the Cold War with the Soviets and the Hot War in Southeast Asia during the 1960s. The author lives in Austin, Texas.