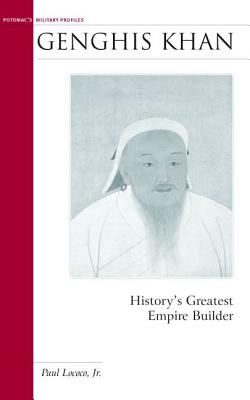 
Not On Our Shelves—Ships in 1-5 Days
It was through bitter experience growing up on the harsh and unforgiving steppes of Mongolia that Genghis Khan learned to trust few people and to be vigilant of the personalities and events around him. As a result of an early life filled with hardship, betrayals, and constant struggle, Genghis Khan developed into a cunning and effective leader of men in battle. He became an innovative commander who disdained customary tactics when those strategies failed to bring victory.Genghis Khan united the tribes of Mongolia in a way never before seen, leading them to the settled lands of Eurasia and achieving almost super-human victories over vastly larger forces. By the time of his death he had created an empire of immense proportions, larger than anything before in history. Genghis Khan addresses how the teenaged son of a minor Mongol chieftain created a military machine of extraordinary striking power and wielded it to conquer such lands as China, Central Asia, and Persia.Potomac’s Military Profiles series features essential treatments of the lives of significant military figures from ancient times through the present. Both the general audience and readers with a professional interest will appreciate each volume’s concise blend of analysis and well-crafted writing. These books also serve as a starting point for those who wish to pursue a more advanced study of the subject.
Paul Lococo, Jr., received his doctorate in Chinese military history at the University of Hawaii-Manoa and is currently associate professor of history at the Leeward College campus. His recent research and publications focus on pre-modern Asian military history, and he is the coauthor with Stephen Morillo and Michael Pavkovic of War in World History: Society, Technology, and War from Ancient Times to the Present: Part IV: The Dawn of Global Warfare, 1500–1750. He lives in Pearl City, Hawaii.
“Paul Lococo has written an admirably clear and accessible study of Genghis Khan. Lococo is thoroughly versed in the primary and secondary literature, and he brings to those sources a keen analytic eye for the crucial aspects of military organization and operations. His insights will benefit specialists, while at the same time his clarity and brevity will make this an especially fine book for classroom use.”—Stephen Morillo, Jane and Frederic M. Hadley Chair in History, Wabash College, and coauthor of War in World History: Society, Technology and War from Ancient Times to the Present

“Paul Lococo has written a concise, accessible, and up-to-date biography of Genghis Khan, one of the world’s great conquerors. He provides not only a glimpse of the man himself but also provides insights into the context of Mongol society and warfare. This study will be of use to those interested in military and world history.”—Michael F. Pavokovic, Associate professor of strategy and policy, U.S. Naval War College, and coauthor of What Is Military History?

“A very useful book for anyone seeking an introduction to Genghis’ life and work, the history of China and Central Asia, and the conduct of war on the vast Eurasia plan.”—NYMAS Review

“Paul Lococo, Jr. adeptly summarizes the life and career of Chinggis Khan, an impressive feat for the brevity of the book.”—H-War, H-Net Reviews