What Do You Stand For? For Teens: A Guide to Building Character (Paperback) 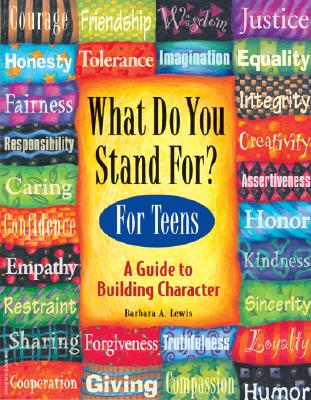 What Do You Stand For? For Teens: A Guide to Building Character (Paperback)

By Barbara A. Lewis


Not On Our Shelves—Ships in 1-5 Days
Young people need guidance from caring adults to build strong, positive character traits—but they can also build their own. This book by the best-selling author of The Kid’s Guide to Social Action invites children and teens to explore and practice honesty, kindness, empathy, integrity, tolerance, patience, respect, and more.

Quotations and background information set the stage. Dilemmas challenge readers to think about, discuss, and debate positive traits. Activities invite them to explore what they stand for at school, at home, and in their communities. True stories profile real kids who exemplify positive traits; resources point the way toward character-building books, organizations, programs, and Web sites.

A former public school teacher, Barbara A. Lewis has received many awards for excellence in writing, teaching, and leading youth in service projects and social action. She and her students have been honored for community contributions by President Clinton and featured in many national magazines and newspapers, The Congressional Record, and on national television. Barbara’s books include The Teen Guide to Global Action, What Do You Stand For? A Kid's Guide to Building Character, The Kid’s Guide to Social Action, and Kids with Courage. Barbara is a sought-after speaker on topics including character development, service, and social action. She has lived in Indiana, New Jersey, Switzerland, Belgium, Utah, and Poland. Barbara and her husband, Larry, currently reside in Park City, Utah. They have four children and five grandchildren.

“A marvelous approach to character development.... Readers will gain insight into who they are and who they hope to be.”
— Voice of Youth Advocates