Improvising a War: The Pentagon Years 1965-1967: Reminiscences of an Untried Warrior (Paperback) 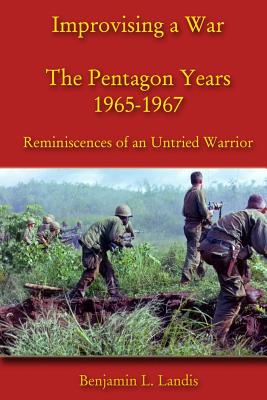 Improvising a War: The Pentagon Years 1965-1967: Reminiscences of an Untried Warrior (Paperback)


Not On Our Shelves—Ships in 1-5 Days
(This book cannot be returned.)
Merriam Press Vietnam War Series

The United States Amy was ill-prepared to engage in a major conflict in Vietnam. This was the consequence of President Lyndon Johnson deciding that the National Guard and the Reserves would not be called up to support the war effort. Army contingency planning for any major conflict was based on the call up of the National Guard and the Reserves. Not being authorized to do so increased exponentially the difficulties in meeting the requirements to fight the war in Vietnam.

Between 1965 and 1968 the United States Army almost doubled in size. Who were the additional personnel? Privates fresh out of basic training and second lieutenants fresh out of OCS, ROTC, or West Point.

Improvising a War is the story of how the Army General Staff coped with this challenge to meet the forces requested by the Army headquarters in Vietnam and approved by the Secretary of Defense.

The author arrived for duty in the Pentagon two days after the first major combat units (1st Infantry Division, 1st Air Cavalry Division) departed for Vietnam and after the creation of the Committee for Unit Deployments to Vietnam on the same day. One day later he became the Representative of the Deputy Chief of Staff for Personnel on this Committee. The responsibility of this committee was to ensure that the units requested and approved were sent to Vietnam on their scheduled dates.

Improvising a War recounts how the committee accomplished its mission (not always successfully) with particular emphasis on the personnel challenges.

Chapter 5: On My Own

Chapter 10: Getting the Job Done