But I Don't Eat Ants (Hardcover) 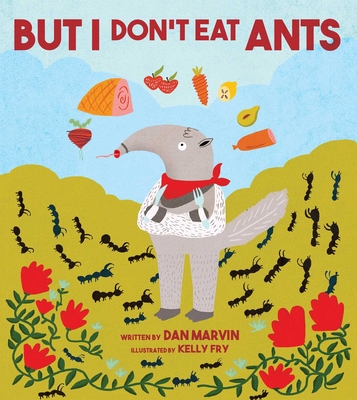 But I Don't Eat Ants (Hardcover)


Special Order—Subject to Availability
"Koala Bears aren't called Eucalyptus-eaters. Panda Bears aren't called Bamboo-eaters. Jaguars eat Anteaters, but they aren't called Anteater-eaters!" insists a voracious young Anteater who will gobble up just about every food except for one: ants! This clever take on the picky-eater is full of wry humor and silly puns as the anteater takes us through the food he LOVES to eat, all while repeating the refrain, "but I don't eat ants." That is until dinnertime when his mom presents him with with a "fiery" surprise. The final punchline playfully depicts the often illogical rationalizations of young picky eaters in a way that will have kids and their parents laughing.
Dan Marvin works in advertising as a writer and creative director. His education includes a B.A. from Michigan State University and comedy classes at The Second City in Chicago and Mark Ridley's Comedy Castle in Detroit. Dan lives in Farmington Hills, Michigan, with his wife Andrea, son Cooper, and daughter Audrey. Andrea and Audrey are picky eaters. Dan and Cooper will try almost anything. BUT THEY DON'T EAT ANTS! Kelly Fry grew up in Portland, Oregon, ​where she rode bikes, ate everything she could, and drew everyday. Kelly earned a BFA in ​illustration and animation from the Pacific Northwest College of Art​ and a certificate in comics from​the ​Independent Publishing Resource Center.​ Her work has been exhibited everywhere from New Orleans, Los Angels, Parma, Italy and Medellin, Colombia. She also makes comics for various anthologies and publications. Today she can be found working in her at home studio. You can see more of her work atkfrydraws.com.
An anthropomorphic anteater enjoys many foods but is vehemently opposed to eating ants. Capital letters are used throughout, beginning with the initial page: "I AM AN ANTEATER AND I LOVE TO EAT." Bright graphics that have the appearance of digital animation show a friendly-looking, gray critter in a waistcoat, its long, red ribbon of a tongue snaking out over a table full of colorful, human foods: a burger on a bun; a pink, triple-layer cake; a bowl of fruit; some sort of pie. On the next double-page spread, readers learn that, like people, this anteater eats three meals a day-and does not eat ants. After a double-page spread full of foodstuffs, there is a droll illustration of anteaters sitting at a place-matted table, with all but one sucking ants out of individual jars labeled, "ANTS." The protagonist is munching-or tonguing-hot dogs and fries. There follow pages of clever, anti-ant-eating wordplay, with matching, funny artwork. For example: "TORTELLINI? TOTALLINI!" shouts the anteater as it whizzes by on a skateboard, one paw on board, the other with a tortellini noodle on a fork. Other cheerful-looking creatures add to the fun. A wry commentary on other animals' diets yields the observation that "JAGUARS EAT ANTEATERS, BUT THEY AREN'T CALLED ANTEATER-EATERS." An apron-clad mother anteater plays an important part in a punch line that will garner knowing nods and grins. Funny, light, and whimsical. (Picture book. 3-6)
— Kirkus Reviews