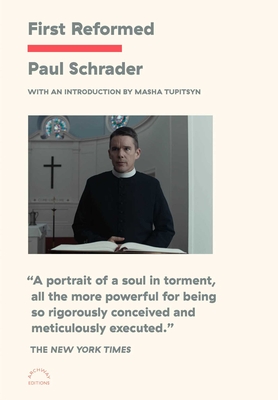 Called “an ecstatic, arc-bright wonder and terror” by The New Yorker, this major work of art now receives a first printing, featuring a brilliant introductory essay by Masha Tupitsyn.

This Academy Award-nominated screenplay is one of the greatest and most urgent in Paul Schrader’s long and decorated career. Called a “portrait of a soul in torment, all the more powerful for being so rigorously conceived and meticulously executed” in the New York Times, First Reformed follows the Rev. Ernst Toller as his crisis of faith coincides with a recognition of looming environmental catastrophe. It is an uncompromising work that seamlessly synthesizes a tribute to Bresson with a profound, existential meditation on the everexpanding devastation that humanity is spreading over the natural world. The crowning late period achievement for an undisputed legend of screenwriting, this is both a master class in concision, depth and emotional range, and a continually relevant work of activist import.
Paul Schrader is one of America’s most acclaimed filmmakers and screenwriters. His screenplays include Taxi Driver, Raging Bull, The Last Temptation of Christ, and Bringing Out the Dead. Films he has written and directed include Hardcore, Mishima: A Life in Four Chapters, Affliction, and Light Sleeper. His seminal text Transcendental Style in Film: Ozu, Bresson, Dreyer was recently reissued by University of California Press.

Masha Tupitsyn is a writer, critic, and multi-media artist. She is the author of several books and films, such as Love Dog, LACONIA: 1,200 Tweets on Film, Beauty Talk & Monsters, Picture Cycle, and co-editor of the anthology Life As We Show It: Writing on Film. In 2015, she made the 24-hour film, Love Sounds, an audio-essay and history of love in English-speaking cinema, which concluded an immaterial trilogy that has been exhibited and screened in the United States, Canada, Europe, and Australia. Her writing on film, culture, feminism, and art has appeared in numerous anthologies and journals such as Bookforum, Artforum, The Los Angeles Review of Books, The Believer, BOMB, LitHub, Fence, Frieze, The New Inquiry, The White Review, and The Rumpus. She has taught film and gender studies at various universities.