The Grandest of Lives: Eye to Eye with Whales (Paperback) 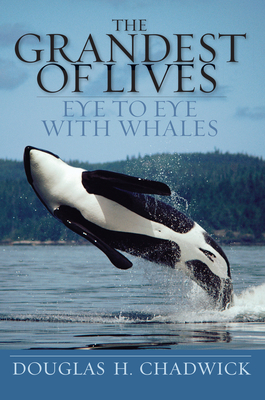 The Grandest of Lives: Eye to Eye with Whales (Paperback)


Not On Our Shelves—Ships in 1-5 Days
The largest creatures ever to inhabit the Earth, whales have long inspired awe in humans. But because they spend virtually all of their time beneath the ocean surface, little has been known about their lives. Now, with advances in technology, new facts and stunning discoveries are coming to light about these magnificent mammals. In The Grandest of Lives, wildlife biologist Douglas H. Chadwick takes readers inside the world of modern–day scientific whale observation, from gathering data to weathering storms to spirited scientific debate. Chadwick, who has followed and reported on whales for more than a decade, paints detailed portraits of five species — the humpback, northern bottlenose, blue whale, minke whale, and orca — that represent a cross–section of the forms and behaviors of cetaceans worldwide. All move seamlessly between natural history and more personal observations, vividly expressing Chadwick's fondness and admiration for these amazing creatures, as well as the sheer joy of being among them.
A wildlife biologist who studied mountain goats and grizzlies in the Rockies, Doug Chadwick began writing about natural history and conservation for national magazines. On assignments from Siberia to the Congo River’s headwaters, he has produced several hundred popular articles and ten books. He is also the vice chair of the board of Vital Ground, a nonprofit land trust that has helped safeguard more than 600,000 acres of wildlife habitat in Alaska, Canada, and the western US.