Beyond the Great Wall: Recipes and Travels in the Other China (Hardcover) 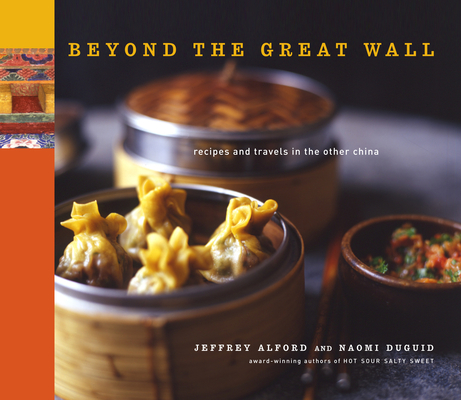 Beyond the Great Wall: Recipes and Travels in the Other China (Hardcover)

A bold and eye-opening new cookbook with magnificent photos and unforgettable stories.

In the West, when we think about food in China, what usually comes to mind are the signature dishes of Beijing, Hong Kong, Shanghai. But beyond the urbanized eastern third of China lie the high open spaces and sacred places of Tibet, the Silk Road oases of Xinjiang, the steppelands of Inner Mongolia, and the steeply terraced hills of Yunnan and Guizhou. The peoples who live in these regions are culturally distinct, with their own history and their own unique culinary traditions. In Beyond the Great Wall, the inimitable duo of Jeffrey Alford and Naomi Duguid—who first met as young travelers in Tibet—bring home the enticing flavors of this other China.

For more than twenty-five years, both separately and together, Duguid and Alford have journeyed all over the outlying regions of China, sampling local home cooking and street food, making friends and taking lustrous photographs. Beyond the Great Wall shares the experience in a rich mosaic of recipes—from Central Asian cumin-scented kebabs and flatbreads to Tibetan stews and Mongolian hot pots—photos, and stories. A must-have for every food lover, and an inspiration for cooks and armchair travelers alike.

Jeffrey Alford is a writer and photographer based primarily in northeast Thailand and Cambodia. He plants and harvests rice each year; helps raise frogs and several varieties of fish; and happily struggles along in three languages: Central Thai, Lao Isaan, and Northern Khmer. His forthcoming book, to be published in 2014, is tentatively titled How Pea Cooks: Food and Life in a Thai-Khmer Village. His earlier books, all co-written with Naomi Duguid, are Flatbreads and Flavors;HomeBaking; Seductions of Rice; Hot Sour Salty Sweet; Mangoes and Curry Leaves; and Beyond the Great Wall. Jeffrey is currently developing a series of intensive culinary tours through northeastern Thailand and western Cambodia (the Angkor Wat area) under the name of Heritage Food Thailand.

Naomi Duguid is a writer, photographer, traveler, and home cook. Her recent cookbook Taste of Persia is the winner of a James Beard Award, an IACP Cookbook Award, and a Taste Canada Award. Her book Burma: Rivers of Flavor is also an IACP Cookbook Award and Taste Canada Award winner. Her six previous award-winning titles, co-authored with Jeffrey Alford, include two now-classic cookbooks that won the James Beard Award for Cookbook of the Year: Flatbreads & Flavors: A Baker’s Atlas and Hot Sour Salty Sweet: A Culinary Journey Through Southeast Asia. Naomi leads small-group food-immersive trips to the Republic of Georgia and elsewhere. She is a Trustee of the Oxford Symposium on Food and Cookery, and is a frequent guest speaker and presenter at food conferences, particularly those focused on grains. She lives in Toronto. Follow her on Instagram and Twitter at @naomiduguid.