The Newish Jewish Encyclopedia: From Abraham to Zabar’s and Everything in Between (Hardcover) 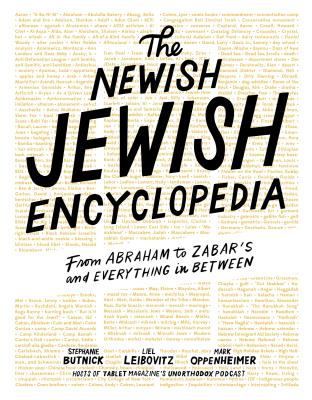 The Newish Jewish Encyclopedia: From Abraham to Zabar’s and Everything in Between (Hardcover)


On Our Shelves Now at:
Named one of Library Journal’s Best Religion & Spirituality Books of the Year

An Unorthodox Guide to Everything Jewish

Deeply knowing, highly entertaining, and just a little bit irreverent, this unputdownable encyclopedia of all things Jewish and Jew-ish covers culture, religion, history, habits, language, and more. Readers will refresh their knowledge of the Patriarchs and Matriarchs, the artistry of Barbra Streisand, the significance of the Oslo Accords, the meaning of words like balaboosta,balagan, bashert, and bageling. Understand all the major and minor holidays. Learn how the Jews invented Hollywood. Remind themselves why they need to read Hannah Arendt, watch Seinfeld, listen to Leonard Cohen. Even discover the secret of happiness (see “Latkes”). Includes hundreds of photos, charts, infographics, and illustrations. It’s a lot.
Stephanie Butnick, Liel Leibovitz, and Mark Oppenheimer are the hosts of Unorthodox, the most popular Jewish podcast on iTunes.

Stephanie Butnick is the deputy editor of Tablet and has written for the New York Times and the Wall Street Journal. She has a bachelor’s degree in religion from Duke and a master’s in religious studies from NYU. She lives in New York with her husband and their cat, Cat Stevens.

Liel Leibovitz is a senior writer for Tablet and the author of several books, including, most recently, A Broken Hallelujah, a spiritual biography of Leonard Cohen. He has a PhD in video games from Columbia, a fact that makes his seven-year-old self very happy. He lives in New York with his wife and their two children.

Mark Oppenheimer is the former Beliefs columnist for the New York Times and the author of The Bar Mitzvah Crasher: Road-Tripping Through Jewish America. He has a PhD in American religion from Yale and lives in New Haven, Connecticut, with his wife and five children.

“An illustrated, smart and comic guide, well-attuned to this moment.”
—Jewish Week

“Crams in just about everything you need to know about Jewish culture and history – from the Torah to Chinese food. . . . A weighty tome that just begs to be picked up, thumbed through, and quoted from. It is exhaustive but not exhausting, a thorough examination of Jewish themes presented as hors d’oeuvres to entice a larger meal.”
—The Times of Israel

“Deeply entertaining and highly educational. . . . Adding their thoroughly modern compendium to a long tradition of Jewish scholarship, the authors have served up a colorful array of all things Jewish for Jews and non-Jews alike.”
—Broadway World

“This delightfully irreverent romp through Jewish history and culture is the outgrowth of Tablet magazine’s podcast, Unorthodox, and considers itself the updated version of The Jewish Catalog (1973). As with Catalog, podcast hosts and coauthors Butnick, Liel ­Leibovitz, and Mark Oppenheimer claim this chronicle is not a comprehensive or exhaustive survey of all things Jewish. To that end, the biblical hero Judah Maccabee is “one kickass priest,” Jewish Community Centers are places “where Gentiles play racquetball,” and Long Island is “the other Promised Land.” Culturally, the authors make a convincing argument for Jews as “mediators of black music” and even responsible for the beloved Christmas tunes “White Christmas” and “Rudolph the Red-Nosed Reindeer.” Bernie Madoff finds reference only under the generic moniker, shonde, or one who brings shame to the community, where he keeps company with Eliot Spitzer and Anthony Weiner. On a more serious note in a compilation filled with humor, brevity is the signature mark of that which requires mention, but not glory—Adolf Hitler, Nazis, and Auschwitz’s Arbeit Macht Frei (“work sets you free”) merit a single sentence each. ­VERDICT A welcome update on Jewish history and culture that is mostly just plain fun.
—Library Journal, starred review

“No dense, scholarly tome, this volume is pure fun, although serious topics are included. . . . . A reference work is rarely as readable as this one is. Informative and irreverent, welcoming and witty, it is enthusiastically recommended.”
—Booklist