After Gandhi: One Hundred Years of Nonviolent Resistance (Paperback) 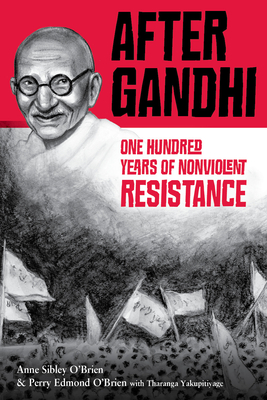 After Gandhi: One Hundred Years of Nonviolent Resistance (Paperback)


In Stock—Click for Locations
In 1908 Mohandas Gandhi spoke to a crowd of 3,000. Together they protested against an unjust law without guns or rioting. Peacefully they made a difference. Gandhi’s words and deeds influenced countless others to work toward the goals of freedom and justice through peaceful methods. Mother and son team, Anne Sibley O’Brien and Perry Edmond O’Brien, highlight some of the people and events that Gandhi’s actions inspired. From Rosa Parks to the students at Tiananmen Square to Wangari Maathai, these people have made the world sit up and take notice. The provocative graphics and beautiful portraits accompanying these stories stir the emotions and inspire a sense of civic responsibility.
Anne Sibley O'Brien has illustrated more than twenty picture books, including WHAT WILL YOU BE, SARA MEE? and the Jamaica series by Juanita Havill. Anne has also illustrated a number of her own books, including THE LEGEND OF HONG KIL DONG: THE ROBIN HOOD OF KOREA, AFTER GANDHI: ONE HUNDRED YEARS OF NONVIOLENT RESISTANCE, and A PATH OF STARS. She lives on Peaks Island, Maine. Perry Edmond O’Brien is a former Army medic who served in Afghanistan and received an honorable discharge as a conscientious objector. He is the founder of www.peace-out.com, a website that helps servicemen navigate the conscientious objector application process. Perry majored in political theory at Cornell University and now works as a labor organizer in New York City.
Aside from the smudgy pastel illustrations provided by Anne Sibley O'Brien, this mother-and-son effort earns high marks both for adding less-celebrated names to the pantheon of peacemongers and for nothing that the nonviolent approach to civil protest doesn't always work--which makes the courage of those who engage in it all the more exemplary. Each of the 16 chronologically arranged chapters highlights a particular event, from the Gandhi-led mass burning of Indian registration documents in 1908 Johannesburg to the worldwide anti-Iraq war protest on February 5, 2003, then closes with a set of rubrics that add detail or historical background. Along with the likes of Martin Luther King, Jr., Muhammad Ali and Cesar Chavez, young readers will meet--and come away admiring--Vietnam's Thich Nhat Hanh, Australian Charles Perkins and the Students For Aboriginal Action, Belfast's Peace People, the Mothers of the Disappeared in Buenos Aires and others who understood that "nonviolence is the weapon of the strong." Might that admiration grow into emulation in some?
—Kirkus Reviews


Using Gandhi as its starting point, this large-format book traces the history of nonviolent resistance by looking at significant adherents from 1908 to 2003, including Martin Luther King, Jr., Nelson Mandela, Charles Perkins, Cesar Chavez, Aung San Suu Kyi, Vaclav Havel, and Wangari Maathai and groups such as the student activists of Tiananmen Square and the Madres de Plaza de Mayo (Mothers of the Disappeared) in Argentina. Each of the 15 main entries includes a little background information as well as an account of significant events. Read individually, these entries offer basic introduction to leaders of nonviolent movement over a hundred years and its potential as a catalyst for change. There are no source notes, but a discursive, chapter-by-chapter bibliography is appended. The handsome design and striking black-and-white illustrations are strong visuals that complement the story of nonviolent resistance in action.
—Booklist

It's been a century since a young lawyer named Mohandas Gandhi peacefully defied the British Empire in support of Indian laborers working in South Africa. In this book, a mother-son team of social activists trace the impact of that seminal event, highlighting the subsequent, worldwide history of nonviolent resistance through understandable text and rich portraits and illustrations. The book does an admirable job of clarifying complex conflicts and conveying that the truth eventually prevails when persistently applied, even against the most malevolent regimes. Coverage includes dozens of examples profiling the durable courage of leaders like Rosa Parks, Nelson Mandela, Vaclev Havel, and Wangari Maathai and ending with a chapter on the role of nonviolence in shaping the future.
—School Library Journal

If children are sometimes led to believe that nonviolent civil disobedience runs a straight line from Mohandas Gandhi to Martin Luther King, Jr., this effort by mother and son authors will expand their understanding. More than a dozen profiles of peaceful resistance movements and their proponents are highlighted here, spanning six continents and a century. Many names will be familiar--Gandhi, King, Rosa Parks, Cesar Chavez--while other activists, such as Charles Perkins (Australian Aboriginal rights), Aung San Suu Kyi (pro-democracy in Myanmar), Wangari Maathai (environmentalism and women's empowerment in Kenya) are probably lesser known among American children. Each entry opens with a few gripping paragraphs that capture the climax of a confrontation and readily hook reader interests; unfortunately, the several pages of context that follow seem fairly dry in comparison... The global scope of the title does, nonetheless, establish its usefulness, both in opening readers' eyes to underexamined civil rights movements, and in raising awareness of resistance activities that may be quietly making waves in their own communities. Gray-tone pastel portraits and illustrations are included, as are an index and annotated bibliography.
—The Bulletin of the Center for Children’s Literature