Stone Giant: Michelangelo's David and How He Came to Be (Hardcover) 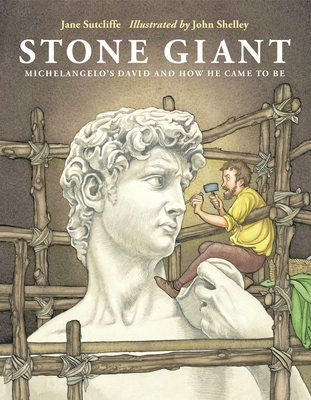 Stone Giant: Michelangelo's David and How He Came to Be (Hardcover)


Not On Our Shelves—Ships in 1-5 Days
Michelangelo saw something—someone—special in the stone.

No one wanted the “giant.” The hulking block of marble lay in the work yard, rained on, hacked at, and abandoned—until a young Michelangelo saw his David in it.

Night and day, Michelangelo worked in secret, lovingly coaxing statue out of the stone. Its majesty endures even today.

This is the story of how a neglected, discarded stone became a masterpiece for all time. It is also a story of how humans see themselves reflected in art.

Back matter includes further information about David and a selected bibliography
Jane Sutcliffe is the author of Leonardo’s Monster (Pelican) and The Attack on Pearl Harbor (Capstone), as well as nearly two dozen biographies in the History Maker series and the On My Own series from Lerner. Jane holds a BA from the University of Connecticut and a master’s from Penn State University, both in Communication Science. She lives in Tolland, Connecticut.

John Shelley was born in Birmingham, UK and grew up in Sutton Coldfield. He studied at Bournville School of Art, then illustration at Manchester Polytechnic under children's illustrator Tony Ross. Following his first major picture book The Secret in the Matchbox, his children's illustrations have been published in the UK, USA, Europe, and Asia. He has illustrated more than forty children's books, including Outside-In: A Lift-the-Flaps Body Book by Claire Smallman and Family Reminders by Julie Danneberg. John lives in Norwich, England.
Sutcliffe makes a big impression with this handsome introduction to one of Western civilization's most iconic sculptures.

When the young artist was summoned from Rome back to his native Florence, he was commissioned to take on a work of heroic proportions. This sculpture of the Old Testament hero David was to symbolize Florentine strength and civic virtue. Michelangelo requested "the giant"--an immense block of creamy marble that had been languishing for over 40 years. Sutcliffe limns the lively details of this multiyear project, and her tale of Michelangelo's talent and industry is considerably enhanced by the thoughtful pen, ink and watercolor work of British illustrator Shelley. He makes the finely modeled realism of the statue the real standout here. (Yes, there are a few views of David in full frontal splendor.) Shelley wondrously juxtaposes this cool, nuanced marble hero with a crowded city, brimming with the bright colors and lively action of Renaissance book illuminations. Backmatter includes an author's note and a brief bibliography (mostly adult titles, no online resources). Sadly missing? An artist's note to help curious readers place all the highly researched imagery and background in more complete artistic, historic and geographic context.

Still, this is a handsome offering that helps youngsters understand both an artist's process and how this stunning statue became the enduring symbol of a city and its people.
—Kirkus Reviews

Renaissance icon and one of the most towering (in more ways than one) of Western civilization’s artworks gets a humorous but respectful, down-to-earth, and easy-to-understand treatment. Readers learn that the city fathers always intended to have a statue of David carved, as a symbol of the small but powerful city, but that their plan wasn’t so simple. Many earlier attempts had come to naught, with even Leonardo da Vinci passing on the idea. Fortunately for Florence–-and posterity–-Michelangelo was persuaded to return from Rome and began his painstaking sculpting, bringing forth his giant almost three years later, in 1504. This well-written, lively account is graced with excellent illustrations, rendered in pen-and-ink and painted with watercolors, that truly convey a Renaissance Italian flavor; there’s even an image of Michelangelo’s sketches for the statue with a poem he wrote about it. Readers should note that David’s frontal nudity is discreetly concealed for the most part, but there is one scene in which the piece is shown from the front, completely uncovered, and another illustration depicts the statue’s bare backside. A helpful author’s note and bibliography conclude the book, though the note fails to reveal that David is now housed in the Accademia Gallery in Florence, and the bibliography includes mostly outdated resources and none that seem geared to young readers. Highly recommended for all public and school libraries and especially recommended for units on the Italian Renaissance and in art classes in the middle to upper-elementary grades.
—School Library Journal