The One Day House (Hardcover) 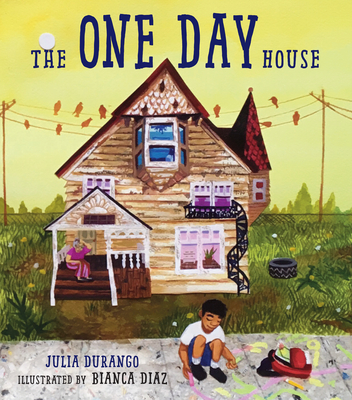 The One Day House (Hardcover)


On Our Shelves Now at:
Wilson dreams of all the ways he can help improve his friend Gigi’s house so that she’ll be warm, comfortable, and happy.

One day, friends and neighbors from all over come to help make Wilson's plans come true. Everyone volunteers to pitch in to make Gigi's house safe, clean, and pretty.

Inspired by a friend’s volunteerism, author Julia Durango tells a story of community and togetherness, showing that by helping others we help ourselves. Further information about Labor of Love, United Way, and Habitat for Humanity is included at the end of the book.
Julia Durango writes books for kids of all ages, including Under the Mambo Moon, The Second Guard fantasy series (Disney Hyperion)—co-authored with Tracie Zimmer under the name J. D. Vaughn—and her debut YA novel, The Leveller (HarperTeen). Julia lives in Ottawa, Illinois.

Bianca Diaz is a Mexican American artist and educator living and working in Chicago.
Young, bronze-skinned Wilson shares with his community and with his elder friend, Gigi, all the ways he wants to improve Gigi's home one day—until "one day" arrives.Before the formal title page, Wilson is seen gazing at a bright pink flier on the window of La Luna Cafe. Opposite this illustration is the flyer's enlargement—"Build Up Neighbors"—entreating readers to "Fix a neighbor's home together!" Wilson has apparently torn off one of the phone-numbered strips at the bottom. The text begins in earnest with Wilson telling Gigi that one day he will paint her house "orange and yellow like the sun." As in each successive conversation between the two, Gigi likes his idea but also reminds Wilson that his presence in her life is more important than any home repair. In between these sweet litanies, Wilson tells such people as the ice cream man, a passing neighbor, and the local librarian of envisioned improvements. All conversations begin with Wilson's "One day…." The vibrant, mixed-media artwork depicts an established neighborhood of mixed ethnicities. Scenes of neighborhood conversations are interspersed with Wilson's own childlike, colored drawings, embellished by such details as his calculations of how many nails would be needed in a new fence. Art and text together radiate a warm message of community and caring. A labor of love honoring labors of love.
—Kirkus Reviews

One day, Wilson promises to paint Gigi’s house “orange and yellow like the sun.” The older woman is pleased and responds, “But today, you are all the sunshine I need.” Wilson’s ideas for his friend’s home are supported by people in the neighborhood, from the ice cream vendor to the local librarian, and even his classmates and teacher. Time and seasons pass, until that one day arrives and the community comes together to repair and spruce up Gigi’s house and yard. The story begins before the title page when Wilson comes across a sign at the local La Luna Cafe. He tears off the phone number encouraging people to “Fix a neighbor’s home together!” Richly colored mixed-media collage illustrations call to mind folk art, naive in tone but effectually depicting the neighborhood and its residents. Images of Wilson’s vision for Gigi’s home are interspersed and appear to done by a child with handwritten notes on the side. This is a warm story based on the author’s experience in cooperative neighborhood efforts. VERDICT A useful and appealing story that provides a great sense of community. An inspirational choice to read aloud or one-on-one.
—School Library Journal

Spending time with an older neighbor, GiGi, a boy named Wilson daydreams ofone day fixing up her house, which has fallen into disrepair. Wilson talks aboutvarious home improvements, such as painting the house “orange and yellow likethe sun,” repairing the stairs, and planting a garden. GiGi is always appreciative,but insists that Wilson’s company is all she needs. When Wilson tells her, “Oneday, I will fix your piano so you can play music again,” GiGi replies lovingly thatshe will like that. “But today, you are the song in my heart.” Durango’s story isnot just about GiGi and Wilson’s friendship; it’s also a celebration of the powerof community. The determined Wilson does not keep his plans to himself, butshares his ideas with seemingly anyone who will listen: neighbors, his teacher, thelibrarian, the ice-cream man. The payoff comes when “one day” arrives and wediscover that kind Wilson was not just daydreaming but thoughtfully putting adetailed plan into action. By using mixed-media art, Diaz subtly mirrors the spiritof the story; the various elements in each illustration (a combination that includescollage, paint, crayons, and handmade paper) give the pictures a collaborativefeel. Just like the community coming together to fix up GiGi’s house, Diaz drawson different skills and techniques to create something greater than the sum of itsparts.
—Horn Book Magazine

Parents want to develop kindness and generosity of spirit in their children. The One Day House by Julia Durango, illustrated by Bianca Diaz, is a wonderful launching pad to start children on a trajectory of altruism. Young Wilson has an elderly friend, Gigi. Wilson notices some things around Gigi’s house aren’t quite right: The house paint is dull; there isn’t a fence for a pet; animals snuggle cozily in the chimney; and the piano is out of tune. Wilson tells Gigi that one day he would like to fix these things for her. Gigi warmly replies that Wilson is what brightens her days, and that he is all the company and warmth she needs. He is what creates the music in her heart. However, Wilson tells everyone what he plans to do—one day. Wonderfully, “one day” arrives with Wilson and the diverse community working together to fulfill Wilson’s entire wish list, giving Gigi a fully repaired, bright golden house. Vividly illustrated collages (using watercolors, gouache, bright acrylic colored paints, ink, pencils, crayons, markers, cut-out pictures and photo transfers) create the illusion that Wilson created the plans for Gigi’s house. The end papers look like homemade paper, with bits of newsprint showing through. All the artwork evokes a homey, happy vibe, like the spirit of helpfulness in Wilson and Gigi’s community. The final pages offer suggestions of ways young people can get involved in their own neighborhoods, to create “one days” in their own communities.
—BookPage

Wilson and Gigi are friends and neighbors who take joy in spending time together. However, Wilson has higher aspirations. He wants to fix the parts of Gigi’s house that are broken down or worn out. And with the help of a few friends, his dreams come true. The inspiration for this story is an annual event in Eastern LaSalle County, Illinois known as the Labor of Love in which hundreds of volunteers come together to aid the elderly, the disabled, and the needy. And events like this are becoming more common in communities throughout America. With repetitive text and images that juxtapose the actual with Wilson’s dreams, this simple story explains why we would want to and inspires us to take action on being a good friend and neighbor. This book pairs well with Last Stop on Market Street, Ordinary Mary’s Extraordinary Deed (with updated illustrations to showcase more diversity), and The House on Dirty-Third Street. Recommended for ages 4 to 7.
--Ingram News and Reviews for the Youth Librarian