The Boo-Boos That Changed the World: A True Story About an Accidental Invention (Really!) (Hardcover) 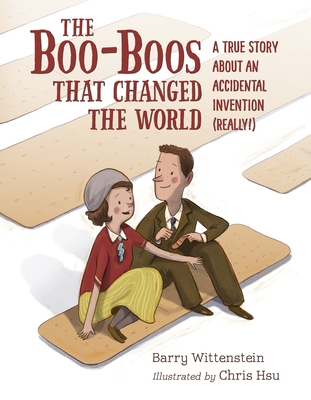 The Boo-Boos That Changed the World: A True Story About an Accidental Invention (Really!) (Hardcover)


Special Order—Subject to Availability
Did you know Band-Aids were invented by accident?! And that they weren't mass-produced until the Boy Scouts gave their seal of approval?

1920s cotton buyer Earle Dickson worked for Johnson & Johnson and had a klutzy wife who often cut herself. The son of a doctor, Earle set out to create an easier way for her to bandage her injuries. Band-Aids were born, but Earle's bosses at the pharmaceutical giant weren't convinced, and it wasn't until the Boy Scouts of America tested Earle's prototype that this ubiquitous household staple was made available to the public. Soon Band-Aids were selling like hotcakes, and the rest is boo-boo history.

"Appealingly designed and illustrated, an engaging, fun story" — Kirkus Reviews STARRED REVIEW
Barry Wittenstein has worked at CBS Records, CBS News, and was a web editor and writer for Major League Baseball. He is now an elementary-school substitute teacher and children's author. He is the author of Waiting for Pumpsie.

Chris Hsu is a classically-trained and versatile artist who has worked in greeting card illustration, advertising, and animation. He is currently a background artist on the animated FX spy comedy Archer. The Boo-Boos That Changed the World is Chris's first picture book.
The Band-Aid is one of those remarkably useful things that just about everyone has used, but has anyone wondered who invented them and how they become a staple in medicine cabinets all over?In an engaging, humorous narrative, Wittenstein reveals the true story behind the invention. In the 1920s, Earle Dickson worked as a cotton buyer for Johnson & Johnson. His wife, Josephine, was an accident-prone klutz who frequently injured herself in the kitchen, slicing, grating, and burning herself. The son of a doctor, Earle worked on finding easier ways to bandage Josephine's injuries than wrapping them in rags. He took adhesive tape, then applied sterile gauze and crinoline, and the first Band-Aid was born. Impressed with Earle's prototype, his boss agreed to produce and sell the bandage, but it took a while to catch on. Once Band-Aids were mass-produced, the company gave them away to Boy Scouts and soldiers serving in World War II, and then they caught on with the American public and the rest of world. Wittenstein notes that some of the dialogue and interactions between Earle and Josephine are imagined. Hsu's illustrations, done in mixed media and Photoshop, have a whimsical, retro look that nicely complements the lighthearted tone of the text. Earle and Josephine are white, but people of color appear in backgrounds. Appealingly designed and illustrated, an engaging, fun story about the inspiration and inventor of that essential staple of home first aid.
— Kirkus Reviews STARRED REVIEW

“Necessity is the mother of invention.” Never is that so true than when it involves actual bodily injury! This book tells the fascinating story of the invention of the Band-Aid in the early twentieth century. Josephine Dickson was particularly accident-prone in the kitchen, inspiring her husband Earle to come up with a creative solution. The narrative moves smoothly through the Dickson’s household solution to the local impact (give Band-Aids to the Boy Scouts) to the global impact (Band-Aids were given to soldiers in World War II and are now used worldwide). Instructive back matter includes additional factual information about Earle Dickson, Band-Aids, and other major medical breakthroughs. The book tells the story with a delightful sense of humor. A running “The End” gag will make kids chuckle throughout as they will think they’ve reached the end of the story only to find out that it is not over yet. The splendid illustrations include historical details that evoke a distinct sense of time and place. VERDICT A funny and illuminating nonfiction entry that will hold particular appeal for aspiring inventors and future medical professionals.—School Library Journal


Band-Aids are ubiquitous, so it's hard to imagine a time without them. But 100 years ago, one worried newlywed grappled with how to help his accident-prone bride bandage all the nicks and cuts she got from working around the house. While the idea seems obvious today, the first iterations of the product were not an instant success. Hard work and patience were crucial. Wittenstein's skillful storytelling makes this a fun and compelling read, and Hsu's illustrations capture the look and feel of the era. With back matter that fleshes out the story and lists other medical inventions of the time, this book is appropriate for a variety of ages.
—Young Children