You Are Special (Board Book): Volume 1 (Max Lucado's Wemmicks #1) (Board Books) 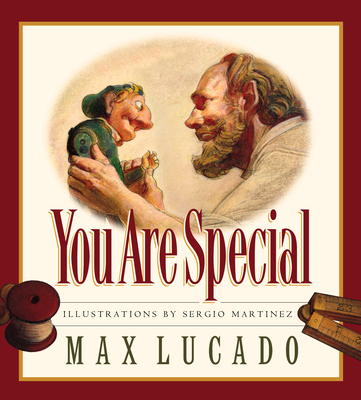 You Are Special (Board Book): Volume 1 (Max Lucado's Wemmicks #1) (Board Books)

In You Are Special, Max Lucado tells the story of Punchinello, the wooden Wemmick who believes that he isn't good enough because of what others say about him. When will Punchinello realize how truly special he is?

You Are Special is a beautiful story that reminds us that we are precious to God just the way we are. It is through spending daily time with him that we begin to see ourselves through his eyes. This is an important truth that children and parents need to know: God loves us even though we make mistakes and have flaws

This bestseller has sold millions of copies and is now available as a condensed board book for younger children.

Max Lucado (MA, Abilene Christian University) serves as the minister of preaching at Oak Hills Church in San Antonio, Texas, and is a best-selling author and speaker. His award-winning books have been translated into more than fifty-four languages and he has been named one of the most influential leaders in social media by The New York Times. Max lives in San Antonio, Texas, with his wife, Denalyn, and has three daughters and one granddaughter.Sergio Martinez was born in Mexico City, studied art in Paris, and has worked as an art director and illustrator on three continents. He has done freelance illustrative work for Disney Press and other major publishers, and has illustrated internationally renowned gift editions of several literary classics including Peter Pan, Pinocchio, and A Christmas Carol. His classic style graces the pages of many children's books including Crossway's best-selling children's book, You Are Special, also written by Max Lucado.Karen Hill is a freelance writer and editor. She is the author of several children's books, including My Faith Journal. Karen and her husband, Art, have three children and three grandchildren.