You Are Mine (Max Lucado's Wemmicks #2) (Board Books) 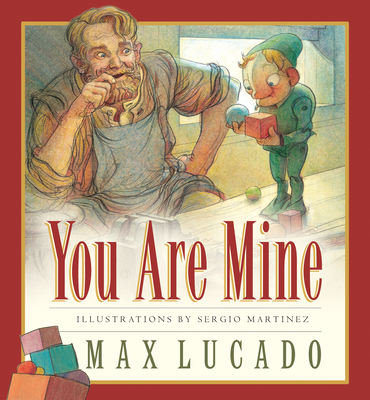 You Are Mine (Max Lucado's Wemmicks #2) (Board Books)

Finally, the citizens of Wemmicksville are saying that Punchinello is a good Wemmick He's always wanted to hear that. But in his effort to please the crowd, Punchinello forgets what his maker Eli has taught him. So when others start collecting boxes and balls, Punchinello decides he wants to have some too. They make him feel so good-until he remembers how his arms ache from holding them all. Until he remembers how tired he is from working just to buy more. Until he stumbles into Eli's workshop and is reminded of how very much he's given up to have those boxes and balls.

Once again at the knee of his creator, Punchinello hears the words he needs the most: You are special, not because of the things you have, but because you are mine. This best-selling sequel to You Are Special is now available in board book format, encouraging hearts of every age to learn of the love of their Heavenly Father.

Max Lucado (MA, Abilene Christian University) serves as the minister of preaching at Oak Hills Church in San Antonio, Texas, and is a best-selling author and speaker. His award-winning books have been translated into more than fifty-four languages and he has been named one of the most influential leaders in social media by The New York Times. Max lives in San Antonio, Texas, with his wife, Denalyn, and has three daughters and one granddaughter.Sergio Martinez was born in Mexico City, studied art in Paris, and has worked as an art director and illustrator on three continents. He has done freelance illustrative work for Disney Press and other major publishers, and has illustrated internationally renowned gift editions of several literary classics including Peter Pan, Pinocchio, and A Christmas Carol. His classic style graces the pages of many children's books including Crossway's best-selling children's book, You Are Special, also written by Max Lucado.Karen Hill is a freelance writer and editor. She is the author of several children's books, including My Faith Journal. Karen and her husband, Art, have three children and three grandchildren.