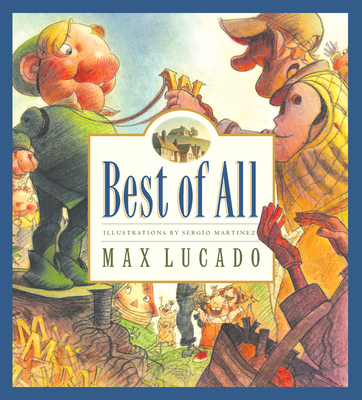 Bess Stovall is famous for being famous. When it comes to Wemmicks, she's the best, they say. Who wouldn't want to join her Wonderful Wemmicks Club? The catch is this: only Wemmicks made of maple can join-the best wood from the best forest.

But Punchinello can't join since he is made of willow. Willow is weak wood, says Bess. No one wants to be a willow. And Punchinello is the only willow in Wemmicksville. Everyone looks down on him, even his friend Lucia.

Punchinello learns a valuable lesson when Eli the woodcarver helps him see that he is special because the Maker made him-the Maker even chose his wood. This latest tale from Wemmicksville will surprise you as Punchinello himself shocks the town with how special he really is.

Max Lucado (MA, Abilene Christian University) serves as the minister of preaching at Oak Hills Church in San Antonio, Texas, and is a best-selling author and speaker. His award-winning books have been translated into more than fifty-four languages and he has been named one of the most influential leaders in social media by The New York Times. Max lives in San Antonio, Texas, with his wife, Denalyn, and has three daughters and one granddaughter.Sergio Martinez was born in Mexico City, studied art in Paris, and has worked as an art director and illustrator on three continents. He has done freelance illustrative work for Disney Press and other major publishers, and has illustrated internationally renowned gift editions of several literary classics including Peter Pan, Pinocchio, and A Christmas Carol. His classic style graces the pages of many children's books including Crossway's best-selling children's book, You Are Special, also written by Max Lucado.