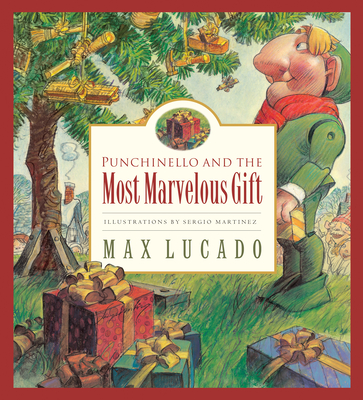 With the Maker-Day Festival fast approaching, Punchinello wants to do something really big for Eli, the woodcarver. But everyone else he meets in Wemmicksville is also trying to make the best contribution to the festival.

Hans believes that his seven-layer chocolate cherry truffle cake with double butter-cream frosting will be the best part, but Violet is sure her bountiful bouquet will come out on top. Lucia knows her vocal solo will make the day, and Dr. Marvel is eager to show off his magnificent Marvellaphony-organoni. What can Punchinello do?

When all of Wemmicksville gathers for the unveiling of the cake and the bouquet and Lucia's solo, Punchinello accidentally destroys the cake, the bouquet, and the Marvellaphony-organoni What could have been a disaster results in the marvelous gift, and the people of Wemmicksville realize that Maker-Day is not about a cake or a bouquet-it's all about Eli.

Max Lucado (MA, Abilene Christian University) serves as the minister of preaching at Oak Hills Church in San Antonio, Texas, and is a best-selling author and speaker. His award-winning books have been translated into more than fifty-four languages and he has been named one of the most influential leaders in social media by The New York Times. Max lives in San Antonio, Texas, with his wife, Denalyn, and has three daughters and one granddaughter.Sergio Martinez was born in Mexico City, studied art in Paris, and has worked as an art director and illustrator on three continents. He has done freelance illustrative work for Disney Press and other major publishers, and has illustrated internationally renowned gift editions of several literary classics including Peter Pan, Pinocchio, and A Christmas Carol. His classic style graces the pages of many children's books including Crossway's best-selling children's book, You Are Special, also written by Max Lucado.